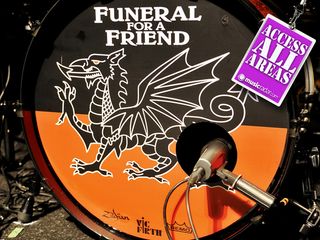 No prizes for guessing which part of the UK FFAF hail from (Image credit: Future PLC)

Heading to a music festival? While you're out front enjoying the plentiful supply of live music thrills, spare a thought for the hard-working, gear-laden tech crews who will be oiling the wheels of your favourite band's festival performance.

In an exclusive series on MusicRadar, Access All Areas brings you an invaluable insight into what it takes to tech at festivals, how to survive one of the toughest days of your working life, and when to stand back and say, 'job well done'.

The latest in a series that has so far included U2, The Killers and Slipknot among others sees us check in with Welsh rockers Funeral For A Friend.

A real young gun in the world of techs, Steven Kneale is three years fresh into his career. Having worked as part of the Twin Atlantic road crew, Steven got his break in Funeral For A Friend when Raw Power Management came knocking.

Now the drum tech to Ryan Richards, Steven is looking forward to this summer's slew of festival dates. Like any good drum tech worth their salt, Steven has his routine down when on the road.

"My job consists of loading and unloading at venues or festivals, then setting up the drum kit, cleaning it and tuning it. Getting the levels right on Ryan's in-ear monitors are a priority, as well as preparing the stage, waters, towels and setlists, and making sure everything runs on time, including change overs and line checks."

Even though Steven is a relative newcomer, he's well-placed to inspire all of you who are looking for your first tech break.

What has been your best, and worst, festival tech-ing experience to date?

"My best festival experience would probably be at T In The Park festival, two years ago with Twin Atlantic. I had only been tech-ing for a short time and it was an amazing atmosphere and a really energetic show.

"My worst festival experience would probably be at Ramfest, in South Africa. Lots went wrong, and the monitors had totally changed since soundcheck. Plus, the drums were sat on a massive riser and it was hard to see what was going on!"

What is the worst case scenario when tech-ing drums at a festival?

"If a drum head bursts and it needs to be replaced. That would be a pretty horrible and unfortunate thing to happen! Another worst case scenario would be cracked or broken cymbals, which would affect the sound."

How do you care and maintain for Ryan's drums throughout a string of festival dates?

"I take cleaning products to keep his drums and cymbals nice and shiny, because there's no excuse for dirty gear! I also pack replacement drum heads, snare drum spares and cymbals, as well as miscellaneous spare parts such as tension rods."

What challenges does a lack of soundcheck present at a festival?

"If any equipment is faulty, it only gives you a small amount of time to act and either fix it or replace whatever has failed. It also means that you have to get the monitor mix spot-on so that the band have their desired sound."

What's the most important tool in your tech kit bag and why?

"I would probably say that the most important item I have is my Leatherman multi-tool, as it can serve so many of my jobs throughout the day. I've also adapted it to have a drum key on it, so it's even more useful."

How do you get your hands on replacement gear, parts or accessories when you're away from home, tech-ing at a festival?

"Most of the time, the companies who endorse Ryan are really good at getting spares to anywhere we are with short notice. If not, it's a walk to the nearest music shop to see what we can get our hands on!"