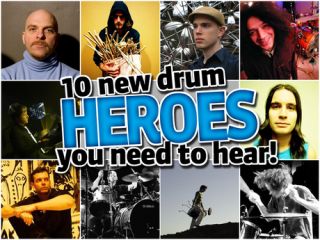 The drum kit has seen many pioneers over the years - Gene Krupa, Buddy Rich, John Bonham and countless other familiar names - whose vision and talent shaped what drumming is today.

But decades have since past; these pioneers are gone and the world of drums has changed. So who are the new drum heroes taking the instrument to the next level? Who are the new guard redefining what it is to be a drummer?

What follows is a list of ten people who, over just the last few years, have earned themselves the title of new drum hero. We salute them, and so should you.

John Stanier made his name as the powerhouse drummer for alt-metal band Helmet back in the early '90s, garnering widespread acclaim for his endurance and accuracy behind the kit.

But it's his more recent work with New York experimentalists Battles - and the necessary self-reinvention required to play with them - that earns him inclusion in this list.

The group's bonkers breed of juxtaposed rhythms and layered counterpoint means Battles can, at times, function as the band equivalent of the most advanced looper pedal in the world - and Stanier deserves praise just for being able to keep the whole lot in check. His trademark robotic grooves anchor Battles' sound, getting the music's countless 'bits' to blend and heave into a cohesive whole.

He's more than just the staple at the band's seams, though. Tracks such as Ddiamondd (above) see Stanier going over and above, scatting with and pushing the beat to create unfathomably off-centre grooves - and still keeping the loop machine going all the while.

David King - The Bad Plus

Piano trio The Bad Plus ruffle feathers in the jazz world - and drummer David King is Chief Ruffler.

Ever since the Minneapolis-based band unveiled their unfathomable hybrid of jazz, indie, rock and experimental with 2001's eponymous debut, David King's outrageous style has turned heads. Within a single bar, King will morph from the archetypal swing drummer - holding the groove with minimum effort - into a sort of jazz Keith Moon: rolling around the kit, crashing, thumping and generally going ape.

His playing is boisterous yet technical, ingenious (King often employs toy instruments in his solos) and, most heroically of all, sticks two fingers up at the often staid jazz purist dogma. Oh, and he's a great writer too: check King-penned Plus tunes Thrift Store Jewellery and Anthem For The Earnest for proof.

The world of Jungle and Drum 'n' Bass grew out of a largely electronic scene in the early '90s - but more recently a small faction of brilliant drummers are bringing live, acoustic playing to the genre.

Following in the footsteps of DnB great Jojo Mayer, KJ Sawka plays jungle and Drum n Bass rhythms with such astonishing precision that it's hard to believe he's a living, breathing person like the rest of us. It's no surprise, then, that Sawka has been dubbed The Human Drum Machine.

Of course, almost all Drum n Bass rhythms are technically challenging - rhythms at 175bpm plus (with a haunted house-full of ghost strokes) are frequent. But the most impressive element of Sawka's style isn't his blinding speed but his feel: the dynamics, the bounce and the roll of his grooves, which he manages to maintain even at such ludicrous tempos.

Add that to the man's extreme multi-tasking ability to trigger samplers and sequencers on the fly and you have a very compelling live show indeed, performed by an incredibly compelling drummer. See his more electronic material here.

To watch Zach Hill is exhausting. To copy him would be suicidal. Topless and slick with perspiration, a cyclone of hair and sinew, fusing berserker power with surgical accuracy, he is the human fill.

When the self-taught 30-year-old takes the stool - and that's pretty often, between his day job with California math-rockers Hella and his endless array of West Coast side-projects - it's a sensory overload. Jaws hang slack in the moshpit at his frantic snare work, slip-sliding time signatures and killer kick technique (it sounds like he's got two bass drums - he hasn't).

By the end, his hands are raw, the kit is sobbing, and the audience is spent. But you'll still want more.

One for the improv fans out there but don't let that put you off (not that it should) - Corsano completely rocks.

Originating from New England, USA, Corsano's main stock in trade is free jazz - watching him wash all over the kit when accompanying the likes of Evan Parker and Paul Flaherty is an absolute blast, be he frantically unscrewing cymbals with a violin bow clamped between his teeth or just flaying the snare within an inch of its life. With a mallet.

Call it 'extended technique' or call it batshit mentalism but it's made Corsano the drummer to go to for those noiseniks wanting their percussion a bit more out there. Cue playing with the likes of Thurston Moore, Nels Cline, Sunburned Hand Of The Man, Jim O'Rourke and Six Organs Of Admittance, plus providing more sensitive back-up for the first ever live dates of outsider blues freak, Jandek.

Lo-fi scenester snobbery then? No way. Example: when Corsano was touring with Björk (he featured on her most recent album Volta), he refused to rest up between shows instead preferring to head back to the UK to play pub gigs for his superfierce raga/rock outfit, Flower-Corsano Duo.

At last! Somebody's worked out how to combine the tribal polyrhythms of West African Ewe drumming with the slaughterhouse riffery of heavy metal within an alt-folk context!

Why? Because Long studied the drumming of the Ewe people - a style that employs complex polyrhythms and ostinatos - and brought his experience to the table when the metal-trained Kroeber arrived. The result is some truly unique and unusual drumming (you'd be hard pressed to find a standard backbeat on a Dodos record) that complements Long's syncopated acoustic guitar rhythms perfectly.

Actually, the sounds Kroeber gets are even more impressive when you realise his drum setup: true to the band's tribal influences, Kroeber uses no bass drum but instead a throng of floor toms (which he pounds with ferocious abandon) and a foot-pedal tambourine.

The sheer number of projects and styles to which Rochford can turn his hand is testament to his imagination and drive and has even seen him tipped as "the hardest working person in music" by critics. Aside from leading experimental jazzers Polar bear (emphasis on mental), he drums punk-jazz with Acoustic Ladyland, rock with Menlo Park, improv with Leafcutter John and even the occasional bit of indie with Babyshambles. There are dozens more - so many, in fact, that Seb himself says he can lose count.

Watching him play leaves little doubt as to why he's in such high demand. Head up and eyes open, Rochford is always listening behind the kit: watching the other players, calculating his next move, executing it with impeccable technique. Rochford brings the best of the jazz ethos to the worlds of punk, rock and indie - making for some of the most vibrant and fascinating music you're ever likely to hear.

Indie bands tend not to boast the best drummers in the world but San Francisco outfit Deerhoof most certainly has one in founder member Saunier.

Despite using nothing more a bass drum, snare and either a hi-hat or cymbal, he manages to navigate the band's ever-changing (normally mid-song) blend of stop-start art-pop with ease. Sometimes it's funky, sometimes it's jerky, sometimes it's sweetly melodic and sometimes it makes Shellac sound like The Saturdays.

How is he so adaptable? According to Saunier, it involves having a simple composed part for each song thus allowing himself the freedom to improvise around that - the result is the structure needed to rein in the band's more idiosyncratic tendencies but also ensure that you never hear the same thing twice.

Add on the fact that live Saunier looks like he's being wired up to a Tesla coil and you have someone who plays clever, plays smart and plays loud. Who could ask for more.

In 1999, Ben Koller deputised for one gig on Converge's then-recently vacated drumstool. He never left, and thank God.

It's surely no coincidence that the drummer's arrival dovetailed with the band's ascent to hardcore royalty with 2001's Jane Doe; after all, it's Koller's brutal power that give this breakthrough album its steel backbone, and his polyrhythmic chops that stop it from becoming a mindless metalcore juggernaut. He's a drum animal who can read music. He's an extreme metaller who cites Michael Jackson as an influence. And it's exactly these contradictions that make Koller a magnetic box-fresh talent in a sea of four-to-the-floor dullards.

The man himself says that if he ever packed in the drums, he'd "play poker professionally and raise goats". Pray that he's joking.

Listening to Oceansize is mind-boggling. Shifting time signatures, sweeping dynamics, ever-evolving mood and timbre - there's often so much going on that the players themselves describe latest album Frames as "the sound of the band ignoring itself."

But they're being modest. We reckon that at least one of them has got it all figured out - that man is drummer Mark Heron.

Hi-hat and snare positioned unusually dead-centre, Heron spreads toms and cymbals symmetrically either side like some vast control panel. With it, he leads the band through their gargantuan compositions like a musical Wizard of Oz. His poise and authority behind the kit is more akin to that of an orchestral conductor than a rock drummer - but make no mistake, he's got the drumming chops down, too.

Equally adapt at hammering home brick-up-your-face double-pedal as he is adding delicate cymbal washes and the lightest of snare ruffs, Heron's musical armoury is huge. He's one of the most innovative drummers in rock, plus we've never seen him hit a note out of place - ever. Given the complexity of the Oceansize's musical ambition, that's no mean feat.