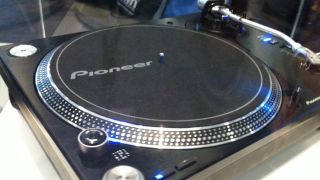 MUSIKMESSE 2014: As was the case with many companies at this year's show, the Pioneer stand at Musikmesse was fairly light on new products we hadn't already seen at NAMM. There was, however, one interesting, albeit mysterious, new offering on display from the all-conquering DJ brand.

In a rotating display case, tucked over to the side of the stand, the brand had on display the as-yet-unseen new DJ turntable pictured above, with no accompanying information and its serial number covered by a piece of black tape. Obviously, with no other information available, we can currently only speculate on Pioneer's plans, although its pretty safe to assume that it means we'll see this turntable officially unveiled at some point in the coming months.

It's not necessarily surprising that Pioneer would have a new turntable in the works - the company have produced pro DJ turntables in the past and, although there's already plenty of quality options available out there, the demise of the Technics 1200s in 2010 certainly opened up a hole in the market.

What is perhaps surprising, however, is how straightforward it looks compared to most of the companys other recent offerings; the bulk of Pioneer's recent DJ products have been focussed around things like wi-fi compatibility and flashy 'performance' features, so the idea of the company releasing a Technics-alike turntable is disarmingly simplistic.

Of course, DJ turntables are still popular and there's definitely a market for simple, sturdy and good sounding record players. If we were to be really speculative, however, we'd guess that this could be the tip of the iceberg and Pioneer may have more up its sleeve. Perhaps that could mean an expanded line of turntables that embrace MIDI features (a la Reloop's recent RP-8000), or maybe Pioneer could be working on a new digital vinyl system and setting its sights on Traktor and Serato. Who knows? For now we can only guess, but hopefully we'll find out more sooner rather than later.