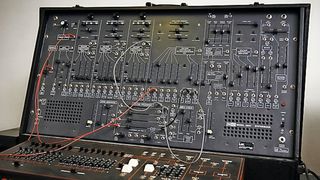 Synth designer Alan R Pearlman, the founder of ARP Instruments, has died at the age of 93. A true giant of the industry, he was responsible for several great synths, including the ARP 2600 and ARP Odyssey.

Writing on Facebook, his daughter, Dina Pearlman, said: “My father passed away today after a long illness. At 93, too weak to speak he still managed to play the piano this morning, later passing away peacefully in the afternoon. He was a great man and contributed much to the world of music you all know today. Hopefully I can find something more eloquent to say, but I am too sad for words right now.”

Pearlman founded ARP (the name was derived from his initials) in 1969, introducing his first synth, the ARP 2002, at the Autumn AES show in 1970. This was quickly followed by the 2500 analogue modular and then the ARP 2600, a classic that offered a fixed signal path under the hood, but one that could be rerouted by plugging cables into the vast array of 1/8-inch jacks that peppered the instrument's front panel. Many years later, Pearlman advised on and endorsed Way Out Ware’s TimeaARP 2600, a plugin revival.

ARP became a serious rival to the likes of Moog, EMS and Buchla, and went on to release the Odyssey, the company’s answer to the Minimoog. Arguably a more capable synth than Moog’s, this is another instrument that has stood the test of time, having been emulated numerous times in software and resurrected in hardware form by Korg.

Financial troubles caused ARP to go into liquidation in 1981, but Alan R Pearlman’s place in synth history was already assured.