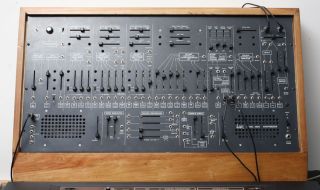 Named after founder Alan R Pearlman, ARP was the "other" big name in American synthesisers in the hurly-burly early years of commercial synths.

Founded not by an enthusiast but an entrepreneur, ARP instruments were designed from the start to batter (and better) the already-shaky reputations of the instruments from rival companies, stealing away much of its sales through shrewd (and sometimes unseemly) business practices.

Prior to 1970, synthesisers were expensive, expansive modular behemoths better suited to studios or the halls of academia. Such a customer base was necessarily limited, and the major players knew that the survival of the fledgling synth market depended on getting this new technology into the hands of performing musicians. Few musos were willing to drag a modular monster onto the tour circuit.

Making its initial splash at the AES convention held in the Autumn of 1970, the 2600 was - like Moog's new Minimoog and EMS' VCS3, both debuting at the same show - meant to usher in an era of portability. All three offered stripped- down, simplified versions of much larger modular systems (the ARP 2500, Moog's legendary modular systems and EMS' main-man Peter Zinovieff's own personal electronic music studio).

Each manufacturer took a different approach to the question of patching on its new portable powerhouses. EMS used a pin matrix to make patch connections, while Moog eschewed patchability entirely for a fixed signal path. The 2600 came down in the middle: there was a fixed path under the hood, but the signal could be rerouted by plugging cables into the vast array of 1/8" jacks that peppered the instrument's front panel.

Like the other soon-to-be-classics on show, the 2600 offered three oscillators with various typical waveforms on tap. There was a distinct difference here, though, in that the 2600's oscillators were relatively stable in pitch - something that Moog and EMS simply couldn't match. ARP knew this, and its advertisements took pot shots at the competition.

The new ARP instrument trumped the competition in other ways, too. For instance, though all three debuting synths provided noise generators, the 2600 offered sample-and-hold circuitry, making it terrific for space-age bleeps and bloops.

With both ADSR and AR envelopes and a built-in reverb tank, the 2600 was beautifully outfitted, even by today's standards. Its oscillators were rich and precise, while its filter could hold its own with Moog's famous 24dB model - and for good reason, as it turned out, for the ARP 4012 filter design was pretty much a 1:1 copy!

Moog got wind of the similarity and soon put a stop to it. Later, the 2600 would sport a different filter, adding yet another variable to please and perturb modern collectors.

Everything that made the 2600 a brilliant instrument in 1970 still stands today: good sound, comprehensive features, and flexility that educates rather than overwhelms the user. Relatively few were made, and with secondhand units now commanding top dollar, virtual realisations are as close as many of us will get to this astonishing analogue.

Featuring a closely modeled recreation of the original 2600, along with a choice of GUIs to match each change in the appearance of the hardware, Arturia throws in a model of the modular ARP 2500 filter, chorus and delay, and an emulation of the 1601 sequencer, along with all of the other percs of virtual synths. For Mac and PC.

How close to the original do you need a plugin to be? When we first heard Way Out Ware's dead-on Mac/PC emulation, we were a little put off by the basic, raw sound of the factory presets. Yet it can't be denied that this is exactly what you'd get if you'd shelled out for the real hardware. Authenticity comes at a price, of course.

Dispensing with virtual cables, this recreation of the awesome ARP makes use of a dropdown modulation matrix to perform all of its routing duties. It allows for the creation of precisely the sort of weird, modulated effects that made the original a favourite among sound designers. Available only to Windows users in 32-bit.