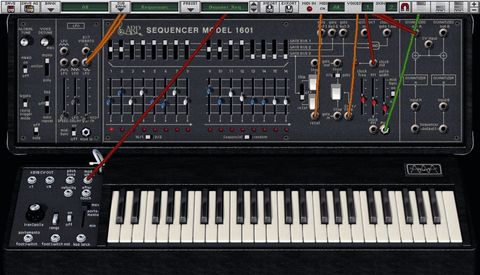 Gives that classic ARP sound, the flexibility of a built-in step sequencer and modular routing.

There's no doubting the ARP 2600´s place on the roll-call of fabulous synthesizers. It was designed back in 1970 by ARP´s founder Alan R Pearlman as the successor to his huge modular synth, the ARP 2500.

Now Arturia has released the ARP 2600V, a software emulation of the classic unit that follows on from their Moog and Yamaha emulations.

The ARP 2600V is divided into three distinct sections - the synthesizer, keyboard and sequencer. You can show or hide the various sections to rationalise your workspace, which is handy for those working on laptops, as this instrument can occupy a fair amount of screen space.

The synthesizer includes three VCOs, a multimode filter, two envelope generators and a VCA. Being a modular synth, it also has a noise generator, a sample and hold section, various control signal mixers, a reverb unit and, diverging from the original ARP 2600 spec, a chorus and delay unit.

The ARP 2600V is pre-wired like a typical analogue synth, with envelopes connected to the filter cutoff and VCA level, as you would expect. You can expand and modify this using virtual patch leads that appear when you click a socket.

There´s no limit to the complexity of your patches beyond the rule of connecting only one modulator to one input. Thankfully, Arturia have included some simple starting points for your patches, which you access via the Template heading in the Bank menu.

The keyboard section is far simpler. It responds to mouse clicks, so you can preview sounds easily without an external keyboard. It also allows you to route MIDI signals to any control input. For example, the pitch bend signal can be routed to filter cutoff for added expression.

Another addition to the original spec of the ARP 2600 is the Tracker, an LFO with a twist. It generates low-frequency waves of its own, but it also processes incoming control and audio signals that you can then use to modulate any control input. We found it useful for mixing together diverse sources to make unusual evolving filter sweeps and bloops. Strangely, the usually excellent manual is a little cagey about exactly how the tracker works - trial and error wins here.

The ARP 2600V includes an emulation of the famous and extremely rare ARP Sequencer 1601, a relatively simple affair, where you can have two separate eight-step sequences running simultaneously or in series for a larger 16-step sequence. These can be patched to control almost any parameter, so you could patch them to open a filter to differing degrees for each key depress, or for sequentially changing the level of noise in a drone sound over time. You´ll also find settings for poly, unison and mono mode on this unit. You can stack up to a whopping 32 voices in unison mode.

If you´re new to the ARP way of laying things out, the ARP 2600V will seem confusing at first. It´s quite logical though, with signal fl ow moving from left (oscillators and audio inputs) to middle (VCF mixer and envelopes) to right (VCA and global pan and level settings). Setting up complex patches becomes second nature remarkably quickly.

The ARP 2600V is stable and mature, and we felt confident using it. It´s no CPU-hog either, running comfortably on a 1GHz G4 laptop alongside many more demanding plug-ins. There are plenty of small refinements that make this instrument a pleasure to use. For example, whenever you click on a socket to make a patch connection, the ARP 2600V highlights all the sockets you can connect to. The virtual patch chords can be set to move out of your way as your mouse moves over them, enabling you to alter the settings they would otherwise obscure.

Simple things like this will help the beginner grasp what´s going on. Add to that a simple and elegant MIDI learn feature, and you have a grade A GUI.

The way you access the presets on Arturia´s whole range of synths, however, could definitely be improved. Arranging sounds in banks and sub banks is handy, but you still have to select them using the archaic ‘cascading menus´ system.

It wouldn´t be fair to single out the ARP 2600V for criticism, as countless products use this scheme, but it´s clunky, graceless and needs an overhaul. If we were navigating through a few dozen settings then okay, I´d look the other way, but we have over 400 sounds here!

So what does the synth sound like? Initial sonic impressions of the ARP 2600V are positive. It gives you instant access to a range of ARP-like sounds, from bouncing bass sequences to soaring leads. In fact, the 400 presets are excellent, with notable inclusions from Kevin Lamb (who's worked with The Neptunes) and Klaus Schultze, one of the pioneers of electronic music.

Just like the original instrument, the ARP 2600V excels at gritty, mid-range sounds with bite and presence. Even relatively mellow bass sounds have that unmistakable ARP growl - turn up the resonance on the fi lter and you're straight into Human League´s Sound of the Crowd territory.

You can also coax some impressive lead sounds out of the ARP 2600V, but make no mistake - just about everything from this instrument sounds vintage. There are no Virus or Neuron 21st century lead sounds here.

Well, it´s pretty close and certainly isn´t disappointing, but it doesn´t have that ‘je ne sais quoi´ of a real synthesizer, let alone the ARP 2600. In isolation it sounds a little static and flat, just like most other analogue-emulating soft synths. Once the ARP 2600V is sitting in a mix it sounds great, and will fool all but the most golden of ears into thinking they´re hearing a '70s synth, but is it a replacement for an original 2600? No.

So who needs this?

These days, you´re just as likely to hear an analogue synth on an alternative rock track by Kaiser Chiefs as on an ambient workout by Ulrich Schnauss. The market for synths is bigger than ever, and the ARP 2600V will be a success, not least because it can add analogue-like grit to any style.

Purists will gag at the inclusion of chorus and delay, and may deny the overall authenticity of the sound, but we still think the ARP 2600V is a great synth. Rating it on its sonic accuracy is a mistake; no matter how good the emulation, a soft synth is not the hardware it´s imitating.

So, let´s move on from all the marketing hype we´ve endured for years and enjoy these programs for what they are. With internal 64-bit word length fidelity, we're listening to state-of-the-art analogue modelling here, and if you want authentic-sounding early '70s analogue sounds, this is the soft synth for you.