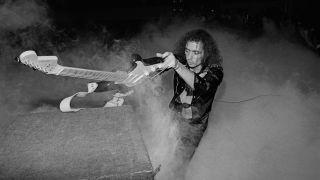 Where do you start with Richard Hugh Blackmore, a man so preternaturally gifted with the electric guitar that one suspects he was not so much born but summoned onto our earthly plane?

There’s a whiff of the Arthurian about the erstwhile Deep Purple and Rainbow guitarist; the enormodome his Camelot, the Fender Stratocaster his Excalibur.

5 guitar tricks you can learn from Ritchie Blackmore

Nonetheless, the Ritchie Blackmore legend was built on earthly pleasures – rock ’n’ roll, Marshall stacks, treble boosters, riffs… Y’know, the good stuff, and it assumes the form of one of rock’s most formidable discographies from one of its most combustible protagonists.

Maybe we should start with Smoke On The Water, a song Deep Purple wrote as they watched their studio burn down in Switzerland. It’s a classic in the Deep Purple fashion, with a righteously groovy 70’s rock verse supporting the Blackmore’s stark monolith intro/chorus riff. But most of us already know that one.

That’s the first thing you learn on guitar, right? And if you work in a guitar store, there are very few treatments to disentangle that genius riff from the post-traumatic association with a long Saturday afternoon on the shop floor.

To that end, we have not included Smoke In The Water here. That’s the first disclaimer. Second is to note that with Deep Purple and Rainbow, Blackmore recorded dozens of tracks that should be listened to, studied, celebrated, and played loud of a Friday night, and we can’t get to them all. Five is the rule… mostly.

Maybe we should run quickly past a few of the most notable omissions. Those who grew up with Alan ‘Fluff’ Freeman’s Saturday Rock Show on BBC Radio One might sue for Black Night to make the cut. It features one of Blackmore’s largest riffs (inspired by the bass line in Ricky Nelson's Summertime) and a low-end boogie groove that reverberates still in the stoner and doom metal scenes. Essential.

From the same period, Speed King, a go-faster rock song and setlist perennial that was lapped two years later by Highway Star. Then there is the bluesy doozy Mistreated (more notable as a David Coverdale showcase? And besides, Rainbow’s version was better), the psychonautic trip of the The Mule, a highlight from 1971’s Fireball, and the late ‘60s floor-filler Hush.

From Blackmore’s time with Deep Purple alone, there are too many to mention. If anything, Blackmore’s proclivity for the neoclassical became heightened once he quit Purple and formed Rainbow in 1975.

In the company of Ronnie James Dio, and with the thunderous power of Cozy Powell on the drums, Blackmore trained his fire on arrangements that were more aggressive, stretching that little bit further as though to compensate for not having Jon Lord’s organ/keys playing to trade off (he did have the likes of Tony Carey, but Jon Lord was one of the few musicians who could pull focus from Blackmore’s guitar playing).

As a result, with Rainbow, Blackmore forged a sound of most precious metal. For guitarists looking for a lodestar of what classic steel should sound like, Rising is essential listening, so too Long Live Rock ’n’ Roll.

Blackmore would later become the Renaissance man of rock, the Man in Black writing medieval compositions in the company of his wife, Candace Night, in Blackmore’s Night, but it’s in the psych-grooves and big riffs of Deep Purple that his real genius lies. It’s in the blazing blues-through-neoclassical-and-back-again of his lead playing. It’s in his ear for combining the instinctive with the exotic, and using Rainbow to colour rock and metal in new shades.

And the following five tracks have got plenty of that genius…

This live version of Space Truckin’ will take you through the wormhole. We can’t guarantee your safe return. Like many Deep Purple jams it has a deceptive groove. The verses ride along on the back of a steel-plated honky tonk blues guitar riff, all up-tempo momentum and a breezy psychedelic vibe that bottoms out with the super-sized chorus riff and Ian Gillan’s call to arms.

There are so many lessons to take from this. The first and most important one is of songwriting, and it instructs us that if you lay down a riff that’s simple over a groove that’s tight and infectious you’ll carry the audience with you. Just keep building and the release at the chorus is all the more liberating.

It seems so simple, and Space Truckin’ is so simple for the audience, its magic easily digested, but listen to Blackmore’s guitar on subsequent verses; he switches up the groove, adding in some syncopated muted chords, heightening the energy in the song.

Everything is building all the time in this song, and that tension is all the more irresistible because we know we are getting to the mother of single-note chorus riffs – and there is nothing cooler on record than the dimension-altering alliance of Blackmore, Roger Glover’s bass and Lord’s Hammond organ working in unison to make a simple motif totally cosmic.

8 ways to improve your Strat

The studio version on Machine Head is perfect but let’s take the extended Made In Japan version as the gold standard. A great band playing live at the height of its powers… Well, there’s nothing like it.

As on record, here Space Truckin’ builds and builds, and this goes for Blackmore’s lead playing too, with his first solo playing it straight – at times he’s almost choking the notes in those super-aggressive blues-rock runs – before the improvised final stages and the descent into the untamed chaos of the aforementioned wormhole.

Another from Made In Japan, an album recorded over three nights at Osaka’s Koseinenkin Hall and the legendary Budokan in Tokyo. The year was 1972, so of course there is a little throat clearing – Louie, Louie! – before Jon Lord kicks the jam off, but even just that little taste of blues vamping that Blackmore-san offers before the track begins in earnest is just exquisite.

Blackmore never confined his musical ambitions to the blues, nor to blues-rock, but it under-pinned everything that he did and offers some of strongest examples of his on-point phrasing – not to mention the ability to groove in lockstep with Lord, and a formidable rhythm section comprising bassist Roger Glover and drummer Ian Paice.

Again, the studio version of Lazy is great, but this finds Deep Purple in heavy jam mode, under the lights and dialled in. It really gets going just over four minutes in. There are no overdubs, none needed.

There are heavier Deep Purple grooves and there are faster, but this turbo boogie-woogie blues features the ultimate shootout between Blackmore at his most playful and Lord, who ran his Hammond C3 through Marshall heads as to give them enough hair, teeth and muscle to take on Blackmore.

We’ll call it a draw. Lazy might be a left-field choice but it’s awesome and it makes the cut as a showcase for Blackmore’s blues chops.

Rainbow's Gates Of Babylon picks up where Stargazer left off on Rising, or at least it expands open the idea that rock and metal could assume the so-called exotic eastern scales and use the double harmonic scale (or Arabic or Gypsy major scale) to extricate itself from the blues-rock idiom, and make complete sense despite being in an alien environment tonally.

Of course, it’s painful leaving Stargazer out; it’s at least as good a track, and is from the perfect metal album, but Gates Of Babylon really foreground’s Blackmore’s guitar. It’s funny, just after leaving Deep Purple, a band in which Jon Lord’s genius at the Hammond organ was an awesome foil, Blackmore’s guitar would be complemented by a different kind of genius in the form of Ronnie James Dio’s voice. They were made for each other.

Check out Blackmore’s solo work here. It’s off-the-hook, and while it is attacked with a similar aggression and precision (the aggression always making sure that Blackmore’s technicality is never too clinical) it is a million miles away from his style on the likes of Mistreated and Lazy.

Some purists decry this live version from that febrile night in Munich, all because it's quicker than the studio recording. And they’ve got a point, it is quicker. The tempo is almost brisk, but not so brisk that the riff loses its swagger, that armoured-played Americana – if anything it’s the studio recording that is too slow.

Blackmore had more than his share of groovers with Deep Purple, some were loosed-hip boogie, others head-nodding, but Man On The Silver Mountain… Well it’s for wrestling minotaurs to the ground and all the more appropriate for its more ostensibly metal setting.

So that’s the meat of the song; the riff. But the potatoes are in the inventive ways Blackmore complements it. He knows when to set it down and let Dio’s vocal’s lead, sprinkling that 16th-note pre-chorus angel dust all over the place so the chorus groove reestablishes itself like it's the third act in a superhero movie.

The expanded live version gives Blackmore a bit more time to play and Rainbow a bit more space in which they can build those dynamics and carry the audience with them. Again, the solo’s lyricism seems inspired by Dio.

Kill The King feels of a piece with Speed King and Highway Star, each and all turbo-rock anthems. Perhaps this was the logical conclusion for that creative direction, a song of such straight-ahead power that it might even have been too much for Deep Purple, but it sure suits Blackmore’s kinetic animalism to a T.

You’ve got everything of Blackmore in this. There’s his sense of drama, opening with a flurry of Gmin arpeggios before one of those super-fast blues riffs that lend themselves to hybrid picking and a verse that is constructed and performed in such a manner as to endow the rest of the song with an unrelenting double-time feel. It’s another illusory act of rhythm guitar from Blackmore, and it’s very clever.

As for the solo, you’ve got your first proto-shred lesson right here. A short passage reprises the arpeggios from the intro, as though to set the scene again, and then going into a helter-skelter act of picking that eschews melody and is played hard as to not let up on the intensity that’s been so carefully crafted before.

Then you’ve got some minor pentatonic pyrotechnics and a license to go off-piste live, bring out your slide (compare and contrast this studio version with that of Live In Munich 1977 above) and holding it down hell for leather until its conclusion. Just listening to this makes you breathless. Play along to it and that’s your workout done for today, and no one need question your rhythm or lead chops again.

Wait, honourable mention? This should be number one. Well you could say that and you wouldn’t be wrong, and where was Burn, where was No No No?

Anyway, quick mention of Child In Time because it has arguably Blackmore’s finest solo. Not that he gets too much else to do here as Jon Lord and Ian Gillan carry much of this track, but when it comes it is a tour de force in rock guitar, starting as ever in something relatively conventional, raw meat animalism, gathering steam with a dizzying flurry of notes and a sense of the psychedelic. Genius.