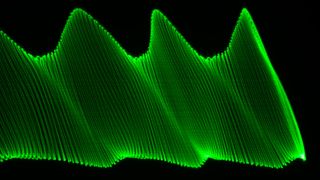 One thing that desktop musicians often struggle with is the distinction between creative and technical terms. An example is the musical term pitch as opposed to the scientific term frequency. Though they both describe the same thing, they aren't quite synonymous. Here's a look at the differences between the two.

One key distinction between these terms is that pitch is relative (a matter of common agreement among musicians), while frequency is absolute (a precise, unambiguous measurement). Both describe how often air-pressure levels, or changes in the air's molecular density, repeat. Nature's simplest form of repeating change is called simple harmonic motion. For our purposes, this refers to changes in air pressure that can be represented by a sine wave.

An example of a scientific description of pressure levels changing at a certain rate could be “The frequency of the oscillation is 440 cycles per second” (or 440 Hz). But a musical description would refer to pitch; for example, “That's an A above middle C.”

Both of these statements are correct, but the scientific description is precise and unwavering; the frequency is exactly 440 Hz - not 440.1, not 441, not 439. The musical description, on the other hand, refers to a flexible convention. The pitch of A could be assigned to any frequency we choose. Some orchestras tune a little sharp, for example, to an A of 442 or 444, to give their sound a little extra bite. Any frequency will do, as long as musicians playing together agree on a common reference. In the Middle Ages, when people lived in isolated communities, tuning could vary widely from place to place: a famous table made in 1862 comparing European church bells reported frequencies of A ranging from 370 Hz to 567.3 Hz.

Another distinction between the two is that frequency describes a physical phenomenon, while pitch describes a perceptual phenomenon. Physically speaking, objects have a natural tendency to vibrate at certain frequencies, which are called their characteristic frequencies. Say you have a tuning fork that vibrates at 100 Hz when struck. This fork is “inclined” to vibrate at that frequency, which is called the fundamental frequency, as well as at any harmonic of the fundamental. (A harmonic is a vibration whose frequency is an integer multiple of the fundamental's, which in this case would be 200 Hz, 300 Hz, 400 Hz, and so on.) Just how strong is this inclination? Expose the fork to one of its characteristic frequencies being sung or being played by an instrument or a synthesizer. As the air-pressure levels around the fork change at one of these frequencies, the fork begins to move in tandem. This physical phenomenon is called sympathetic vibration or resonance (for more on this subject, see “Square One: Standing Tall” in the January 2005 issue of EM).

Perceptually speaking, how does the human auditory system interpret these vibrations? Our musical understanding is based on the perceptual phenomenon of pitch class. A pitch class is the entire superset of all instances of a certain note, regardless of what octave they are in. And all members of any given class retain a certain identity regardless of register. To prove this, try playing a well-known tune like “Happy Birthday” on a piano. Randomly transpose different notes by an octave (or two or three or four) in either direction. The melody remains familiar and intact, even though the register jumps around.

We hear a change of an octave when a given frequency is doubled or halved. This means that the frequency range spanned by an octave depends on the specific frequencies in question. The span from 100 Hz to 200 Hz is smaller than the span from 800 Hz to 1,600 Hz, but to our ears, the pitch distance sounds equivalent: an octave has been traversed.

Like other objects, musical instruments tend to vibrate at multiple harmonic frequencies simultaneously, rather than at just one harmonic frequency. What does that mean perceptually? As stated earlier, harmonics are whole-number multiples of an object's fundamental vibration, but pitch class is determined by equal frequency ratios. This means that not all harmonics are of the same pitch class. Fig. 2 shows the pitches that are produced by the first 16 harmonics of a low C.

People who learn a technique called analytic listening can hear individual harmonics as separate pitches, but the vast majority of us hear a single pitch, typically determined by the fundamental frequency. The presence or absence of frequencies above (and in some cases, below) the fundamental gives the sound its tone colour or timbre.

An example of a real-world application in which the relationship of frequency and pitch is a factor can be seen with bandpass filters. They allow a certain band or range of frequencies to pass, limiting all others. A typical bandpass filter has three adjustable parameters. The first is called a centre frequency, which is the frequency that passes through the filter at the highest power levels the filter will allow. The spectrum output by the filter is usually symmetrical in shape, with the power levels decreasing above and below the centre frequency (for more on spectra and power levels, see “Square One: You've Got the Power” in the September 2004 EM).

Making sense of music often involves understanding the interplay between science and our perception of physical phenomena. And the difference between frequency and pitch is just one such example.