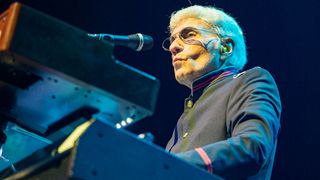 If you only knew the band Styx through their power ballads “Babe” and “Lady,” you might wonder why I’m covering them this month. When a band achieves massive commercial success, people tend to forget the powerful musicianship that fuels the music. Styx has always displayed a strong hard-rock attitude, and many of their tunes hint at some serious prog-rock influences.

Keyboardist Dennis DeYoung, who started out on accordion, has solid chops, and his synth playing was important to the band’s sound. DeYoung appeared on the cover of Keyboard in January 1981, when he spoke to Bob Doershuck about his playing style with more than a little bravado: “I’m not saying this to be pompous or egotistical, but when I listen to my synthesizer and keyboard playing, stylistically I don’t ever hear anybody else who plays like me. Maybe that has something to do with the accordion, although I never thought about it in those terms.”

Let's examine some of his best work. So, grab an Oberheim synth (or a decent hardware or software emulation), dial up some sawtooth waves, add a little portamento, and off we go!

The best example of DeYoung’s synth soloing style is on “Fooling Yourself (The Angry Young Man)” from The Grand Illusion (1977). Guitarist Tommy Shaw allegedly wrote the tune about his first impressions of DeYoung and his personality: It certainly provided a great platform for DeYoung, who took two solos in it. Example 1 shows the first solo, which is played over a 7/4 adaptation of the verse chords. (This was the ’70s, when a band could get away with that in a Top Forty single!) He uses the D Mixolydian mode to traverse the chordal movement over a D pedal bass. It doesn’t seem like he’s trying to outline, or specifically match up to the chords; he’s just riffing around on the scale/mode. This allows for a number of moments where colorful notes appear against the chord. For example, nearly every time a C major chord happens, he hits a note that he might not have played if he were trying to play the chord changes. In rock, this can be a good approach, because outlining the chords can come across as sounding too “jazzy,” which De Young would have wanted to avoid!

In bar 9, the tune moves to 4/4, which DeYoung outlines using arpeggiated chords, and I like how he doesn’t try to match up to the C major chord that hits on the second half of beat 2. He waits until beat 3 to start outlining it so the part doesn’t seem as simplistic—a small but important touch. The full solo is available HERE.

At the end of the tune is another solo, this time over a 6/8 groove, with a series of triads played, again, over a D pedal-tone. Example 2 shows the opening of this solo, which plays through the song’s fade-out. This section is squarely based on the D major scale, and DeYoung, again, stays within those note choices. But he keeps it interesting by not simply playing the scale from D to D. Through bars 6-8, he uses the Dsus4 sound to create color and then resolution in bar 9. Bar 10 has the only non-scale tone (a C natural) and then it’s time for some portamento fun with alternating octaves.

The title track from Crystal Ball (1976) became a staple of their live shows, and I chose to feature the version from Caught In The Act (1984) to showcase Dennis’ solo break. In Example 3 as the solo opens, he enters with a gliss up the white keys. For the next chord (a D major) he again glisses up and seems to be still playing in E minor (using the Dorian mode). After a third gliss up into the E minor chord, DeYoung plays a great descending figure centered on F#, the ninth of the chord. He continues playing E minor-based lines with a Rick Wakeman-like ornamental turn in bar 6. Interestingly, in bar 8 he runs up the D major scale, while on an E minor chord. The D major scale and the E Dorian mode use the same notes, but it is more interesting to play scalar runs starting on notes other than the root of a chord. This example ends with a very melodic descending triplet phrase. My complete transcription of the solo is available HERE.

A top ten hit that had a synth solo

Although the synth solo in the album version of Come Sail Away was edited out for the single, Styx always included it in concert. I’ve chosen the live version from Caught In The Act for Example 4. Over a two-chord vamp on a pedal Ab, DeYoung quotes the original solo melody, with a few rhythmic variations. It’s all based on the Ab Mixolydian mode and it has nice color thanks to his hanging on the C note for the Gb chord over an Ab bass (basically an Ab7sus4 chord) in bars 6 and 8, giving it a Lydian/sharp-fourth sound.