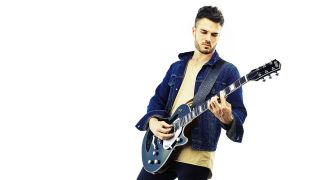 Every blues jam needs a chord progression and these 10 shapes are guaranteed to give you a bona fide blues sound.

To get you started we’re looking at some chords in the guitar-friendly key of A. You’ve probably heard of a I-IV-V (one-four-five) progression - it’s a common blues chord sequence and its name tells you that the chords are built on the first, fourth and fifth notes of the major scale. So, in the key of A (A B C# D E F# G#), the chords are A, D and E. Either jam on these three major chords or use 6ths, 9ths and dominant 7ths for an authentic blues vibe.

We’ve used open-string root notes, but if you shift the root notes to fretted versions (at the 5th fret of the fifth and sixth strings) these can be moved to any key you like. John Mayer uses these types of chords in songs like I’ve Got A Woman and Eric Clapton uses them in Ten Long Years.

Listen out for the different sounds of each chord type. The 7th and 9th chords sound tense and edgy; the 6th chords are softer, well suited to ballads and gentler parts.

The 6th and 9th chords here are based on the same shape, just two frets higher for the latter. We’re using a fingerstyle approach much like John Mayer does – this allows you to pick out a bass note separately from the main body of the chord, so why not try jamming a solo without the backing track?

This example continues the John Mayer idea and adds in a simple Eric Clapton-style turnaround section. This turnaround can be used to set up for a repeat of the 12-bar blues progression or used as an ending, just as we’ve done here.