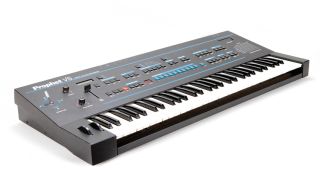 Released in 1988, the Prophet-VS was the last synth produced by the MkI version of Sequential Circuits - and what a beauty it was!

A digital/analogue hybrid, the Prophet-VS’ gimmick was enabling four digital waveforms to be blended together via a built-in joystick. The user could choose from 96 factory waveforms or 32 of their own design. A mix envelope was available to automate the interaction of the waves, and filter and amp envelopes offered loop points for even more motion. A comprehensive modulation matrix gave an already capable instrument even more flexibility. Throw in one of the best arpeggiators ever made up to that point, and you have a sound designer’s dream machine.

Alas, the Prophet-VS was a little too late to the party to save the company. After over a decade of innovation and exploration, Sequential was in its death throes. And yet, behind the scenes, Yamaha had stepped in to acquire the company, keeping Sequential’s innovations alive in new products, such as the vector-capable SY22 and TG33.

Some of Sequential’s boffins ended up at Korg, transmigrating the spirit of the Prophet-VS into Korg’s stellar Wavestation, an instrument Dave Smith himself had lent a hand in designing. Smith would, of course, reappear on the scene in 2002 with the Evolver, which had much in common with the Prophet-VS, and the Dave Smith Instruments badge has found its way onto a number of popular synths and drum machines over the past 15 years. Recently, in an astonishing show of good will, Yamaha returned the name Sequential Circuits and the familiar black-on-silver badge is proudly displayed on the recent Prophet-6.

In this walkthrough, we'll relive the glory days of the VS with Arturia's amazing emulation of it, the Prophet V3. For more virtual Sequential Circuits synth emulating tomfoolery, get your hands on the January edition of Computer Music.

Step 2: The Prophet V3 has a far superior interface to that of the original, but it's otherwise utterly faithful. Play a few notes. As you can hear, its a fairly nondescript, though purely digital-sounding patch. If we click the Wavetables tab just to the left of the display, we can see that there are four waves, all identical, and called ‘079.guit’. The oscillators are labelled A-D.

Step 3: The power of the Prophet-VS lies in its ability to crossfade between these four oscillators and the waveforms loaded into each. Use the little horizontal slider above Oscillator A’s waveform display to choose the wave called 044.44. To solo this oscillator, shove the Prophet’s joystick all the way to the A position.

Step 4: Let’s now select some different waveforms for the other three oscillators. For Oscillator B, choose 084.add3, and for Oscillator C, select 064.orient1. Finally, for Oscillator D, we’ll go with 089.spec3. These waveforms sound drastically different to one another and will easily demonstrate the power of the Prophet’s vector synthesis engine.

Step 5: By waggling the joystick as we play and hold a note, we can sweep through the four waveforms in real time. We can also program the Prophet V3 to do the work for us, just like on the real thing. To do that, we need to leave the Wavetables page and tab over to the Mixer Envelope display, where we find a graphical representation of the joystick.

Step 6: Click the power button in the top-left. Click and drag the centre square to place a 0 in the vector field, then drag that all the way to the A. Now our sound will start with Oscillator A’s wave. Repeat this process, spreading the remaining four squares to various places in the field. Adjust the Rates on the right to program the duration of travel between points.