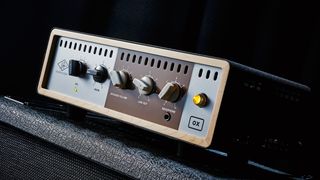 In the dim and distant pre-digital past, recording the electric guitar was an arcane process full of variables that made any kind of consistency difficult to pin down.

You have a guitar with pickups whose DC resistance changes with temperature; an amplifier with valves that wear a little more every time it’s turned on; speakers with paper cones that significantly change behaviour at different temperatures and humidity levels; microphone choice and placement; and the biggest thing to get right or wrong - the room in which you set everything up.

It used to be that amateur recordists had two choices: embrace all those unpredictable variables and record the guitar in a live room with natural ambience (eg traffic noise, arguing neighbours, planes flying overhead, etc), or record everything direct to desk, adding effects and, hopefully, dynamic range later.

Today, thanks to digital technology and high-quality load boxes, we can have our cake and eat it.

Cabinet, microphone and environment simulation means you can get a consistently great room sound anywhere, from the studio to your bedroom or even the stage. That’s really where Universal Audio’s OX fits in, and it’s the quality of its effects and room emulations that’s generating all the excitement.

However, while the OX has the undeniable pull of the Universal Audio badge, it isn’t the only player in this relatively new niche, with the strongest competition coming from French company Two Notes Audio Engineering, who became innovators with the VB-101, which has since been upgraded and re-launched as the Torpedo Studio (£1,269).

There’s also a trimmed down 1U rackmount version aimed at the stage called the Torpedo Live (£689), a load box combined with a studio DI and re-amping box called the Reload (£560) plus a recently-released stage load box - with analogue cabinet simulation and DI - called the Captor (£199). It’s notable that the Two Notes Remote app, that runs alongside the Torpedoes, works on both Mac and Windows platforms.

Can you do all these speaker emulation tricks in good old-fashioned analogue though? Predating the digital gadgets by several years is Rivera Amplification’s Rockcrusher range, including the totally analogue Rockcrusher Recording (£699).

There are no digital effects or room emulations, nevertheless thanks to indestructible build quality and cool practical details like the illuminated EQ sliders, the RockCrusher Recording is an indispensable part of the toolkit for many top LA players including Slash, both live and in the studio. If the RR’s features are overkill, there’s the new Mini RockCrusher Recording (£399) that’s trimmed back to the essentials and takes up far less real estate.

Other notable non-digital designs include Radial’s Headload (£1,145), another combination of load box and speaker simulator, Mesa Engineering’s Cab Clone (£295) and let’s not forget one of the very first usable modern load boxes, Hughes & Kettner’s Red Box (£89), now in its fifth incarnation and one of the most affordable solutions.

So, faced with all this choice, what’s the best solution? If you own, or spend significant time in a well-equipped studio, then the OX or Torpedo Studio offer digital preset convenience and high-quality sounds. At a price. The OX’s built-in digital effects will blow many outboards out of the water, giving you extra flexibility, so it makes sense in the studio.

We’re not so convinced the OX is as practical for live use as some of its competitors, but maybe after a firmware update or two that could change. In the analogue sector, Rivera’s RockCrusher Recording is still in a league of its own. There’s something about the immediacy of grabbing a slider and pulling your ideal tone out of it that’s very satisfying. We haven’t mentioned the all-digital solutions, of course, like Line 6’s Helix or Fractal Audio, which has just released the Axe-Fx III.

While neither are load boxes, both are capable of providing authentic speaker simulations as well as amps and effects. While we enjoy playing with all the latest toys - doesn’t everyone? - sometimes there’s no substitute for the real thing. If you can find a decent room to experiment in, the fun you can have trying out different real microphone techniques is as good as any keypad.

This writer’s favourite combination, for example, is a tried-and-tested classic for many engineers: a Sennheiser MD421 pointing at the cone, combined with an SM57 pointing at the rear of the cabinet, and a good condenser or ribbon set way back to hear the room effect.

Blending these three sources with care provides a great vintage analogue sound, especially into valve microphone preamps. Ironically, with products like the OX it can be replicated and repeated to perfection for not much more than the cost of those microphones. That’s technology for you!