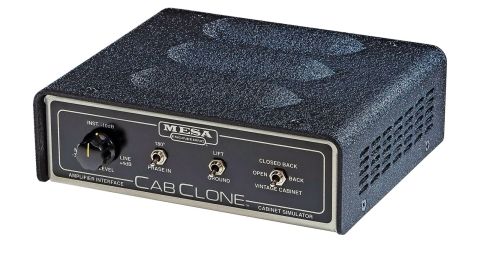 A totally professional tool that can sort out any number of recording and mic'ing issues.

The humble load box has recently been re-invented by the clever folks at Mesa Engineering, and the result is a small, beautifully designed and indispensable product called the CabClone.

It has three functions: a load box, a speaker emulator and a balanced DI output. The built-in resistive load works for amps up to 100 watts and auto-activates if a loudspeaker isn't plugged in.

The DI output is fully adjustable from mic to pro line level, ensuring the CabClone will interface with practically everything you'd care to throw at it.

Finally, the speaker emulator has three settings to approximate open, closed and vintage closed back cabinets. On the back there are jack in and out sockets, an XLR for the balanced DI, plus an unbalanced line out, and a headphones socket.

The CabClone works without drama and has plenty of reserve power handling capacity. The real surprise, even by Mesa standards, is the quality of the CabClone's speaker emulation, which is practically a dead ringer for the real thing.

We compared it to three different 4x12s and an open-backed 2x12; used direct into a PA system it was impossible to tell when the CabClone was in use - you can almost hear the ambience and air of a real enclosure being pushed.

Beyond doubt, Mesa has taken the load box/speaker emulator to the next level and created a product that's practically essential for any regularly gigging guitar player. As you might expect from Mesa, it's not cheap, but the superior build and tone quality more than justify the price.