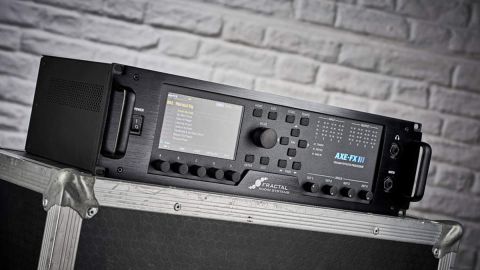 Other, more affordable units will probably scratch the itch for most players, but if you simply, positively have to have the best road-ready modeller in the world, then accept no substitutes.

To many, the Axe-Fx is synonymous with modern digital modelling.

The myriad amp options, EQ and tone-shaping tools and the addition of a powerful noise gate made the original a no-brainer in the late-2000s for the emerging wave of ‘djent’, or modern technical metal bands, that were seeking new tones not easily delivered by a real amplifier.

They’re by no means the only users, however, with players as diverse as Devin Townsend, Alex Lifeson, Billy Howerdel, The Edge, Keith Urban and Guthrie Govan incorporating them into their rigs, either for amp modelling, effects, or both.

The Axe-Fx III is a huge update to Fractal’s flagship, bringing a host of new features to the table, such as a redesigned user interface, a large colour screen and a more ergonomic front panel. There’s also an overhaul of the processing hardware, with non-processing audio tasks delegated to a microcontroller, while two 1GHz ‘Keystone’ Digital Signal Processors handle the heavy lifting.

Their benchmarks peg its performance at double that of the Axe-Fx II, and audiophile components, such as Burr-Brown op amps in the signal path, mean excellent signal-to-noise ratios that will beat most dedicated audio interfaces - plus, thanks to a USB port, you can use the unit as an interface for your DAW, and for re-amping to boot.

Prog titans Tesseract were well-known Axe users, with the band using the Axe-Fx Ultra and FAS Modern model. Inspired by classics like the Peavey 5150, according to Fractal, it was an attempt to design an ideal metal amp that wouldn’t have been possible in the real world. As a result, it’s the logical place to start on the Axe-Fx III.

With the bass rolled off, some presence in, a hefty noise gate in the mix and some input gain and saturation, we’re quickly able to get some tech chug on the go with a 7-string. More surprising, however, is that a six-string in drop-C still sounds huge, and even graduating to a more vintage- voiced Jazzmaster in standard, a couple of tonal tweaks are all that’s required to keep you in metal nirvana.

There’s a great Rectifier-style patch, as you’d expect, as well as everything from a Bad Cat to a Diezel VH4. They’re voiced very differently, so tweaking is required to get them to their sweet spot, but the results are worth it. There are more Fender and Marshall models than you can shake a stick at, as well as a decent selection of Vox and Orange, too.

While we’re blown away by the articulation of some of the more saturated models like the jumpered Plexi, it’s actually the 5F8 Tweed that has us staying put the longest. Open and full, paired with a tasteful bit of reverb, it’s single-coil blues heaven. The Double Verb patch, meanwhile, delivers articulate and crisp Twin-style cleans, with additional treble and presence delivering more New Wave, Police-style chime. Adding in some chorus reveals a gorgeous stereo image, and combining the chorus with a cranked Marshall sound channels Billy Howerdel’s dense, multi-layered A Perfect Circle tones.

While the effects library is sprawling, it’s mercifully not too difficult to navigate once you’re editing a patch. There’s a plethora of delays, choruses and mods from subtle echoes to multiplexed, stereo delays. In addition, a number of the stock banks have some imaginative examples of heavy effects-chaining, with granular-style verbs, ambient volume swells (we like the Black Hole preset) and delays that gradually detune the input. Leaving the amps entirely aside, you quickly understand why touring pros like John Petrucci might take an Axe-Fx on the road for its effects alone.

Although competitors like the Helix are perhaps more immediate, the Axe-Fx III has made great strides in terms of usability and ease of editing. Fractal Audio has once again laid down the gauntlet for what the professional end of the modelling market should aspire to.