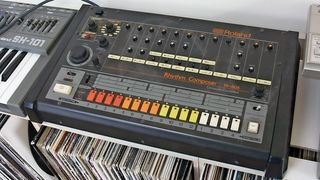 Trap has come a long way since its origins as an offshoot of southern hip-hop. As well as finding itself integrated into EDM as an intrinsic element, it’s been fully hybridised with pop by various mainstream artists, and remains massively influential on hip-hop as a whole. And that, dear reader, is largely down to its uniquely languid, laid-back drum tracks.

The drums in trap are all about fast, mad hi-hats, lazy handclaps, and, of course, that sub-shaking TR-808 kick/bass combo. While most producers make the nearest set of 808 samples their first port of call when it comes to programming trap beats, here we're going to do it differently, using a separate plugin for each component of the whole trap kit. We'll be using D16 Group’s excellent Punchbox plugin for the kick, AudioThing Hand Clapper and Hats for the clap and hi-hats, and Native Instruments’ Battery for the snare.

We won’t be getting into effects processing here – we’ll save that for another day – but by the end of this walkthrough we should have a genre-authentic trap groove ripe for embellishment and sonic polishing.

Step 1: The TR-808 kick drum in trap can serve as the bassline, too. We're using D16’s Punchbox plugin to generate ours, with the 808 synth layer algorithm, and an attack sample from the Tools section’s Trap category. We switch on Keytrack so we can pitch the kick up and down, and extend the Decay to bring out the pitch.

Step 2: Programming the notes for the kick involves considering not just the drum part but also the bassline - it needs to strike the right balance between the sparseness of the former and the business of the latter. The synth and sample layers also need to be balanced in Punchbox to get the right blend of kick transient and bass tail.

Step 3: We’ll use a handclap for our backbeat, with the snare deployed for offbeat embellishment. We fire up AudioThing’s Hand Clapper on a new MIDI track, switch it to the 808 model and program a simple backbeat. We then tweak the Tone controls to brighten up the sound, and ‘smear’ the clap with the Repetitions controls.

Step 4: For the hi-hat, we turn to AudioThing’s Hats, which combines two sample layers with an 808 emulation. We don’t need the samples, so we make sure only the Noise section is active, with Grain all the way down. We shape the sound with the Short and Long Env Decay controls.

Step 5: Super-busy hi-hats are a trap hallmark, so you can get as weird as you like with MIDI programming. Our part jumps between eighth-notes, 16ths and 32nds, using fast velocity-ramped triplet runs for flourishes. If you like, you can also pitch the hats up and down at their more hectic points, but we're saving that sort of action for…

Step 6: …the snare. The 808 is ubiquitous in this department too, so we load one up in Native Instruments’ Battery. The MIDI part is syncopated and similarly skittish to that of the hi-hats, but this time we apply velocity ramps, as well as automation to sweep the pitch up and down through the various rolls and runs