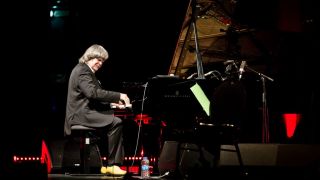 Boogie-woogie is a driving blues piano style that features a rolling, “eight-to-the-bar” rhythm. It’s based on ostinato bass figures in 8/8 time, and mostly uses the 12-bar blues harmonic scheme.

While the left-hand sets the pace with its sometimes-changing figures, the right-hand plays often improvised melody lines or patterns using a variety of techniques such as single-note lines, tremolo, glissandi, cluster chords and more.

In a typical boogie piano solo, every new chorus will introduce a different melodic idea based on the abstract blues scheme, thus challenging the player’s imagination. Boogie-woogie is credited with helping to create the styles of rhythm and blues and subsequently rock ’n’ roll, which imported its signature eight-to-the-bar feel.

Ex. 1 is a typical boogie bass line in the key of C. It follows the basic blues progression, which is four bars on the I chord (C), two bars on the IV chord (F), two bars back on the C, two bars on the V chord (G), and finally back to two bars on C. A special feature here is the change of the left hand’s position on the last tone of the preceding bar to the chord change.

For example, at the end of bar 4, the last note is already on F, although the bar belongs to the tonic part in C. This creates extra drive by anticipating the upcoming chord change. Always retain a relaxed feeling when playing boogie bass lines. You’ll be rewarded with a firm foundation for your right-hand improvisations.

Ex. 2 is set over the bass line and harmonic progression of Ex. 1. It demonstrates two typical boogie-woogie right-hand features: large chords in heavy counter-rhythms to the bass line, and short glissandi, which provide a driving feel that pushes the rhythm forward while alternating with the chords.

The purpose is to create a strong “off-beat” feel over the rolling bass. This is highlighted by the C minor chord on the first beat of the bar, which imparts the feeling of a diminished G7 chord without actually playing one. The short downward glissandi at the end of bars 3 and 6 are executed by holding the top note with your little finger and letting your other fingers roll onto the remaining notes.

Ex. 3 is a common boogie-woogie piano intro. It sets the stage with both hands playing chords in a strong parallel rhythm. Like previous examples, this is in the key of C and uses the 12-bar blues scheme.

The opening tonic chords (with added seventh extensions), alternate with diminished C chords to impart harmonic variety. To play these in a stylistically correct way, add a “jumping” feeling to them.

Ex. 4 is another type of boogie intro, this time in F. In contrast to Ex. 1, the opening chorus largely forsakes big chords and clusters for a more transparent sound. Instead of heavy opening chords for the first four bars, the right-hand plays a short melodic motif, accompanied by whole-note chords in the left.

The bass line is played in octaves as a “walking bass,” and is based on the three basic chord tones. This type of bass line is harmonically simple, but it creates rhythmic momentum as it moves up and down within each bar.

Ex. 5 is a boogie-woogie piano chorus in C, this time played a medium pace. The entire chorus consists of a right-hand melodic line in two voices, which creates an inherently bluesy sound. This line is paired with a chorded bass part that further emphasises the bluesy atmosphere.

This example shows that it’s essential to have a feeling for melody as well rhythm and harmony to play boogie-woogie properly. Also note that in bars 6, 7, 8 and 11, the small grace notes are played by sliding your index finger from a black key to a white one. This lets you play them quickly without complicated fingerings.

When you can’t bend, blend

“The problem with the piano is that you can’t bend notes on it like you can on other instruments, explains Axel Zwingenberger. “Instead, you create that bluesy feeling by playing with the differences between major and minor sonorities.”One of today’s leading archaeologists of the boogie-woogie style, Axel now performs with the band the A, B, C, and D of Boogie Woogie, featuring Rolling Stones drummer Charlie Watts.