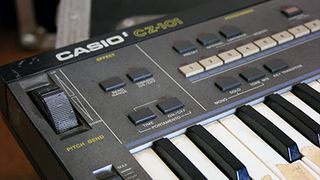 Casio’s CZ synths gave a cheaper, easier, way in to digital synthesis than the DX7. It was still capable of those cool, digital tones, though. Like Yamaha’s FM, Casio’s Phase Distortion synthesis was ideal for tuned percussion patches that were hard to get with analogue instruments. Let’s try it with VirtualCZ.

Step 1: The default Init patch sounds a bit ‘analogue’, but we want a woody, percussive patch – so we need to grok VirtualCZ’s architecture. Note that the Osc section consists of two ‘lines’. Each can produce two ‘shapes’, or waveforms. Click on Line 1’s A and B buttons, and select a Square wave for each.

Step 2: We’ll use Line 1 to define the percussive strike in our patch. We’ll need to shorten the Amp envelope. Currently, the Amp envelope has two stages. First, we’ll turn the Sustain off for every envelope. This is found in the upper-left of each. Stage 2 defines release time. Let’s turn it clockwise, to a value of 270.

Step 3: Now, let’s use the Pitch Envelope to simulate our strike. We’ll crank up the first slider (Level 1), as well as its Rate knob just below. We’ll set the second Rate knob to 87 (15ms). Next, we’ll go to the DCW Env. This behaves a little like a filter. We’ll set its second Rate knob to a value of around 88 (11ms) in order to define our transient strike.

Step 4: Let’s get Line 2 in on the action. We’ll click the button in the Mix section and select Line 1+Line 2. Once again, we’ll select a pair of mellow square waves for our wave shapes, and we’ll set all of Line 2’s envelope sustains to Off. We’ll go to Line 2’s Amp Env, and set its second Rate knob to a value of 56, or 296ms.

Step 5: That’s getting close to the sound we want. Let’s use Line 2’s DCW envelope to bring it home. We’ll set its second Rate knob to 77. Line 1 is a bit loud, so we’ll go to its Amp Env and reduce the level of the sole active slider. Now we can fine tune, tweaking velocity and keyboard modulation of the envelopes until we have a perfect percussive patch.