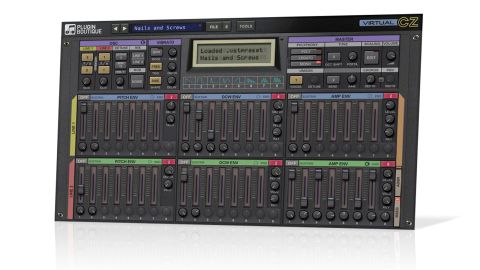 A fantastic emulation of the original synth, VirtualCZ makes a great buy for Casio fans and bargain hunters alike.

Back in the mid-80s, analogue synths were viewed as outdated and expensive, with digital technology finding favour as the next big thing. The Yamaha DX7 was the undisputed king of this pre-workstation era, but Casio also found success with its CZ range of synths.

While Yamaha's DX series was based on relatively complex phase modulation synthesis (marketed as frequency modulation aka FM, though the results are very similar), Casio's hardware relied on simpler phase distortion (PD) synthesis.

Though not as powerful as PM/FM, PD could be used to generate a range of interesting sounds, and the technology seems to have come back into vogue recently, being implemented in u-he's excellent semi-modular Bazille, for example.

While PD is a simple synthesis technique compared to PM/FM, Plugin Boutique's CZ-inspired plugin VirtualCZ (VST/AU/AAX) isn't at all intuitive unless you're familiar with the synths it emulates.

The manual is little help, with the all-important section on CZ-Style Phase Distortion Synthesis "coming soon", users instead referred to online PDFs of the original synths' documentation!

There are eight of these waveforms to choose from: Saw, Square, Pulse, Double Sine, Saw Pulse and three Reso shapes, which are hard-synced sine waves with sawtooth, triangle and trapezoid envelopes.

You can morph between the original sine and the alternating waveforms with a turn of the DCW knob, or use the dedicated eight-stage envelope to create this movement automatically.

If you'd prefer a less complicated approach, there's a standard ADSR envelope onboard, too. Each Line also has it's own pitch and amplitude envelopes, and the Lines can be independently detuned via their Octave, Semitone and Fine parameters.

Further harmonic interest can be introduced with the Ring and Noise Modulation modes, and as well as the three basic Mix settings (Line 1, Line 2 and Line 1+Line 2), Line 1+Line 1 mode makes Line 1 heard alongside a detuned version of itself.

This is particularly useful in conjunction with the synth's Ring Modulation capabilities, opening the creative door to cool DnB Reeses and other such filthy sounds for those prepared to experiment a little.

In 32-note polyphonic mode, VirtualCZ's voices can be set to alternately pan around the centre point with the Pan Width knob, while the mono and legato modes feature up to eight-voice unison detune with free-running or synced voices.

VirtualCZ does a great job of emulating Casio's flagship CZ-1 phase distortion synth. Compatibility with patches from the CZ-101, CZ-1000, CZ-3000 and CZ-5000 models (via SysEx) makes it a must-have for any CZ enthusiast, while those unfamiliar with Casio's family of synths will find plenty of interest in its characteristic squelchy basses, weird digital effects and soft, nostalgic plucks.