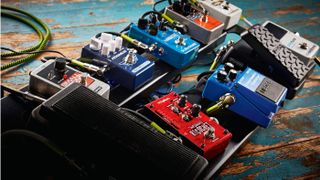 The guitar world is notorious for its jargon, and no more so than when it comes to guitar effects pedals and pedalboards.

Here, we breakdown and define some common terms used in relation to effects.

Most commonly found on digital pedals, this means your dry guitar signal is unaffected by the effect’s digital converters.

Buffers are often misunderstood: in tech terms, they provide a high input impedance and low output impedance, which is designed to maintain your tone when bypassed. Good-quality buffers, such as those found in most Boss pedals, retain your guitar’s high-end and keep it that way across big pedalboards and long cable runs.

They also do away with switching noise and allow trails to ring out when you bypass a delay or reverb. Too many buffers can cause a build-up of noise and interfere with vintage fuzz pedals, so experimenting with pedal placement is crucial. A well-planned pedalboard will feature a mix of buffered and true bypass pedals.

If you’re using your amp for gain, you’ll want to employ its effects loop for your modulation, delay and reverb effects - this prevents them being muddied by your amp’s drive. Gain, wah and pitch effects go into the input of the amp. Running effects into the input and the effects loop is commonly known as the four-cable method.

The use of multiple overdrive pedals in sequence to achieve thicker gain tones. For example, running a boost into an overdrive, or combining fuzz and distortion.

Investing in a good power supply will make your pedalboard sound its best. Isolated power supplies are more expensive, but provide each pedal with its own power source, preventing the hum and hiss that can result when combining power for certain pedals.

Confusingly, there are two types of looper: there’s the kind that Ed Sheeran uses to sample and repeat his playing, while the other refers to true bypass loopers or switching systems, used to bypass multiple pedals at once or create presets, such as TheGigRig’s G2.

When an effect begins to feed back into itself - think delay pedal spaceship noises!

The short cables used to connect pedals together. Solderless kits allow you to cut cables to size and assemble your own without whipping out the soldering iron.

The ability to track more than one note at once, whether that’s for pitch-shifting or tuning.

Used to sync effects to exact tempos, mostly on delay and modulation pedals.