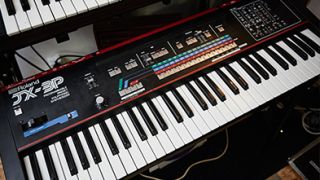 Roland’s JX-3P has always been overshadowed by its more famous stablemates, yet it’s a terrific source of thumping basses, searing leads and thick analogue textures. Roland themselves have given the old dear some long overdue respect, including among the many offerings in its Roland Cloud subscription service.

Now you can have this classic synth in your DAW we thought it might be time for a reintroduction. Read on to get to know the Roland JX-3P.

Step 1: At first glance, the JX-3P looks almost like a preset string machine, with few controls on offer. However, a flip through its rather small list of presets reveals a capable – if oh-so-80s – instrument. We want to start from scratch, so we’ll click on the Patch button to reveal the available patches and click the New button to create a new bank of blanks.

Step 2: We select the A1 slot and close the Patch window. Now we’ve got a very plain sound. There are only a few parameters on the front panel. On the original, parameters could be edited one-at-a-time or via an optional hardware box, the PG-200. Fortunately, Roland has hidden the PG-200 under the Edit button. Let’s open it up.

Step 3: It isn’t really a vast playground, but it isn’t bad, offering some things that other budget Roland synths lacked, such as a second oscillator with cross-modulation. Let’s find the Source Mix section and bring DCO-2 into the mix. Now, let’s go to DCO-2 and change its Waveform to PLS (pulse). We’ll also decrease its Range to 16.

Step 4: Next, let’s go to the Cross Mod section and set its switch to the Metal position. It gives the sound a little extra bite. Let’s turn to the JX-3P’s VCF section. We’ll set both Cutoff Freq(uency) and Resonance knobs to 12 o’clock. Now, we’ll set the Env-1 Mod knob to a value of about 48. This causes Envelope 1 to modulate the filter cutoff.

Step 5: Turning to Env-1, we set its Decay and Release knobs to 183. We set its Sustain to 62. This causes the filter cutoff to decrease after a bit. Now, for Env-2 for the amplitude. Decay should be at 77, Sustain at 112, and Release at 172. This makes for an evocative, chiming sound. Set the first Effect Type knob to Chorus and slam the Depth amount.