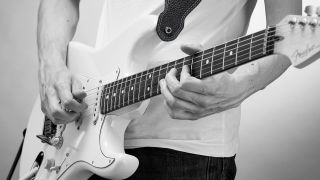 Guitar Skills: Paradoxically, one of the greatest challenges faced by the novice chord substitutionist is the minimal groove-driven vamp.

There might only be a single chord, or perhaps even just the suggestion of a chord, floating over a bass riff. One thing’s certain: you can’t just pound away on one chord. So, what do we do?

Let’s look at what most people do. This kind of musical scenario is quite common in the stylistic area between funk, soul and old-style R&B, so we’ll take an imaginary James Brown groove, suggesting E major or E7 chords. We don’t want to clump around with full barre chords, so the options are usually partial chords, like the first three shapes here. Or you could slide into that classic funky E9 shape. But you’ll feel empty and unfulfilled, won’t you? You’re a creative artist, damn it! You might as well be playing Mustang Sally or Wonderwall. What we need is… new shapes!

Starting low, this chord has two important features. The sweeter sounding 13th (C#) takes us away from the straight 7th sound. And then the root is the highest note, giving the whole chord a less obviously ‘guitar’ sound. Strictly speaking, it’s E7add6, but it’s often called E13.

The content of this chord isn’t all that different from the familiar E9 shape above, but again, we’ve moved the root note to the top. Simply inverting a familiar shape (that being the technical term for what we’ve done) can give a chord a new lease of life.

This is also an E9, but it has a totally different sound, thanks to the internal arrangement of notes.

Lacking the root or crucial 3rd (E and G#), this is only a suggestion of E13, but the intention is there. The two outer notes form a dissonant major 7th interval, which works great for horn-style stabs. You can easily add the higher D note to create little riffs.