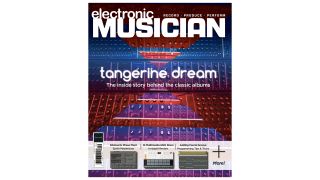 Hear our audio examples to accompany the latest issue of Electronic Musician.

Haven't picked up the latest EM yet? Search Electronic Musician on Apple or Google digital news stands or subscribe here.

Rushing or dragging? It's all in the backbeat

The Art Of Synth Soloing

Example 1: Using Rob Papen’s Blue 2 softsynth, listen to the unaffected riff, then a version with LFO Rate modulation modulation added to the vibrato.

Example 2: Using Spectrasonic’s Omnisphere, listen to the straight riff, then a version with tremolo using the same LFO rate as the vibrato. This is followed by a version using a slower LFO rate for the tremolo.

Example 3: Using Arturia’s DX7 V listen to the straight riff with vibrato followed by a version with added Modulator modulation, brightening the sound when I introduce the vibrato.

Example 4: Using Arturia’s Mini 3 listen to the straight riff, followed by adding sweeping the pitch of the synced oscillator along with the vibrato.

Example 5: Using Rob Papen’s Predator 2 soft synth, we first play the riff using only vibrato, followed a version fading in an oscillator tuned an octave below, plus a sub-oscillator.