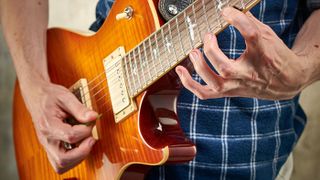 We’re not joking when we say wacky! The Locrian mode is rarely heard in rock or pop and only occasionally found in metal and jazz-fusion.

That said, have a listen to Juicebox by The Strokes, and Black Sabbath by, you guessed it, Black Sabbath - both feature Locrian riffs.

However, so weird is this mode, even these tracks aren’t fully Locrian. Their riffs are Locrian, sure, but jam along on a m7 b5 chord (the root chord of the Locrian mode) and you’ll find it just doesn’t quite fit. Still, despite its unusual sound, the Locrian mode provides ample opportunity for fresh, creative ideas.

The Locrian mode uses the same notes as the major scale - it just starts on the seventh note. That means C major gives you B Locrian. Easy! Notice all the flattened intervals (marked b). These give the mode its own dark, dissonant sound. The b2 and the b5 are the most important intervals - they really bring out the Locrian vibe.

Here are C major and B Locrian - they have the same notes but the Locrian mode starts on B. Play the scales one after another to see if they sound different to you.

The Locrian mode has a m7 b5 root chord. How so? Well, start on B and hop over every other interval in the mode and you get the notes of Bm7b5 (B D F A) - it’s the same process with any mode’s root chord, in fact.

Few songs have m7b5 root chords (it just sounds so flippin’ weird!), but occasionally you’ll see a m7b5 followed by a major chord a semitone higher - indicating that you may be in Locrian territory. Try jamming with these two chords to get your ear in and try the simpler B5dim chord too.

This riff includes the vital b2 (C) and b5 (F) intervals. The bass guitar outlines the staple Locrian semitone move from the root note (B) to the b2 (C).

Our lick starts and ends Locrian, and, once again, the b2 and b5 notes (C and F) give the modal sound. However, in bar 2 we opted for the B blues scale (B D E F F# A). Why? Well, this scale includes a b5th so it can sound Locrian, but bringing in the F# note (highlighted red) allows you to use your favourite pentatonic ideas too. Try it!