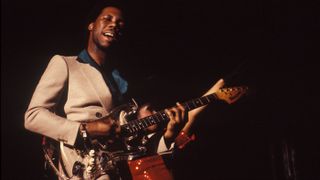 Last time we saw how major and minor chords (called ‘triads’) are made of three major scale notes. Triads are made of stacked 3rd intervals - simply play a note, miss the next note, then play the following note to make a 3rd.

Extend the scale into another octave and continue adding 3rds to build some richer-sounding chords - the kind favoured by jazz and funk players like Nile Rodgers.

You can add any major scale note to a triad and you’ll always be in key. Some notes sound better than others, but, of course, trust your ear. Read on as we look at some extended chords...

2. Extending into another octave

If you continue adding 3rds you will quickly reach the end of the scale. At this point the notes are repeated an octave higher. The numbers continue to ascend but the note names restart on the root note. We’ve only got space to go up to D (the 9th), but chords use 11ths (F) and 13ths (A) too.

The G note is missing from our Cmaj9 chord (C E G B D) to make the shape playable. Built on the second note of the C major scale, our Dm9 (D F A C E) lacks its A note.

This example shows a range of different chords that can be created just from the notes in the C major scale. There’s quite a lot to work on here and some of the shapes may be new to you, so play slowly through the progression before trying them out over our short backing track.