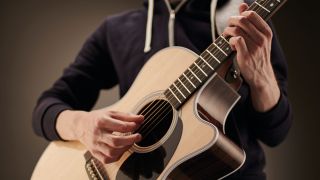 WORLD GUITAR DAY 2017: Prime yourself for any jam with this lesson on the basics of acoustic guitar playing.

It doesn’t matter whether you’re an absolute beginner or if you’ve played for a little bit longer, strumming, open chords and basic fingerstyle are skills that every acoustic guitarist needs to have.

These essential techniques will help you to learn your first songs and jam with other musicians, too.

Start by trying out some of the chord shapes and strumming exercises.

You’ll need a plastic pick (aka plectrum) for this. Fingerstyle is a little bit tougher so expect to spend more time on this.

The tab here tells you to strum an E chord the first four times, then eight times at twice the speed. The idea is to start by playing downstrokes, then when you double up, use a down-up motion to make the speed easier to manage. It’s a basic strumming method that’s used in all musical styles.

We're switching to a D chord here as we try a new rhythm. Use your down-up motion from before but leave out the last two upstrokes - this creates space at the end of the strumming pattern. Symbols are used under the tab to denote downstrokes and upstrokes, starting with a downstroke.

Once again, we're creating a bit of space in the music and generating a new rhythm by simply ditching a few pick strokes. Remember to keep your down-up motion going constantly; just miss the string all together on the second, fifth and eighth pick strokes.

The easiest way to fingerpick is to use your thumb to pick the three bass strings and your index (first), middle (second) and ring (third) fingers for the third, second and first strings respectively. You can play a lot of music without changing this approach.

With your your fingers assigned to the relevant strings, try this simple exercise. Just hold down an E chord and play a bass note followed by the three treble strings. Your thumb moves from string to string. Your fingers stay on their respective strings.

Just as you did with strumming, you can mix up your fingerstyle rhythms by missing out a few pick strokes. In bar 1 the fifth note is held on from the fourth note, doubling its length, and the last note also lasts twice as long.

The best budget acoustic guitars in the world today