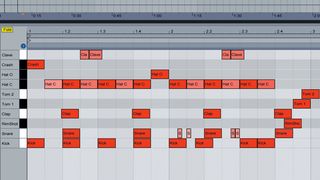 The drum kit - real, virtual or electronic - is used in many different ways, depending on the genre in which it's being put to work. The individual components that it consists of, however, are constant.

Here, we'll take you on a guided tour of all of them, from kick to crash via everything in between. For your complete guide to designing Killer Beats, pick up the January edition of Computer Music.

The pumping, beating heart of the rhythm in practically every genre, the kick is the largest drum in a real kit and so delivers the lowest frequencies. In disco and many dance genres, it’s often played relentlessly on the beat, as in bar 1 of our example above, where it doubles up with the snare/clap on the 2 and 4. In rock genres, the kick is not usually played together with the snare like this, demonstrated in bar 2.

Whether real or electronic, a typical kick drum has 3 sonic components: an initial transient smack that's very short and can cover practically the entire frequency range; a rapid drop in pitch, which gives that chest-thumping punch; and finally, sustaining at the fundamental frequency (usually below 120Hz, right down to 40Hz, and theoretically even as low as 20Hz), responsible for the real low-end, speaker-rumbling bass. The exact balance and character of these three vary depending on genre and mix requirements.

The kick’s main compadre, the snare is higher in pitch, with a fundamental frequency usually around 150-300Hz. Like the kick, it has a three-stage transient/sweep/fundamental core construction, but there’s an extra element: the rattling, white noise-esque sound of the snares themselves, which are wire springs resting against the bottom head of the drum (or an electronic approximation of them). This gives the snare its rasping top-end presence.

In most genres, the snare is found on beats 2 and 4 (the backbeat), providing a sense of push and forward motion. However, it can be displaced, and extra hits introduced, to create variations and syncopated beats. When the hits are very quiet, as in bar 2 of our example above, they’re called ghost notes, filling gaps in the beat and adding a further sense of propulsion.

The snare’s main sound comes from striking the head, but further sounds can be produced. The sidestick/cross-stick gives a woody ‘click’ that’s very often confused for the rimshot, which is actually a super-punchy hit produced by whacking the head and rim simultaneously.

Sometimes used as an alternative to the snare drum in dance genres, or stacked with the main snare hits, handclaps are usually a sample of multiple people clapping at once, or a synthesised approximation. The snare’s strong, defined transient can easily mask the clap’s diffuse one, so the clap is often played a little earlier than the snare to make it stand out, as in our example above. The clap may also be used as an extra percussion element, unrelated to the snare part.

The hi-hats are a pair of cymbals that are pushed together or moved apart using a foot pedal, and struck with a stick. They’re extremely expressive, ranging gradually from short and staccato (closed) to sustaining and washy (open). Their character is bright and metallic, and electronic hi-hats approximate the real thing. With a real hi-hat, open and closed sounds cannot be used simultaneously, and this is often mimicked in electronic beats, cutting off the open hi-hat when a closed one is played.

Rhythmically, hi-hats often play a repetitive pattern (eg, eighth-notes, as in our example), keeping the groove flowing while the kick and snare play a more syncopated figure. The kick and snare pattern may remain identical throughout a section, with the hi-hat used to add variation via dynamics and opening/closing at strategic points.

The ride is a large, heavy cymbal generally struck on its body to produce a clear ‘ping’. Essentially an alternative to the hi-hats, a drummer will often play on hats in the verse and ride during the chorus, for contrast. Ride and hat patterns (pedalled hi-hat excluded) are rarely played simultaneously by real drummers, and so the ride is not featured in our example beat. In electronic music, however, the ride and hat often coexist.

Similar to the kick but higher in pitch, often sounding more melodic because of this. On the drum kit, toms are usually reserved for fills at the end of sections, as in our example, but they can also be used for thunderous, tribal beats, or in place of the ride or hat for low-down grooves with little cymbal action.

In electronic music, toms are often encountered as an addition to a full beat, adding extra low-end groove.

Typically marking the start of a section, as per our example, or used during fills, crash cymbals are bright and almost harsh in character. They have a fairly long decay, though this is sometimes shortened artificially in electronic music.

There are many other percussive sounds that can spice up a beat. These include clave, cowbells, ‘rimshots’ (usually actually a sidestick sample!), congas, bongos and more. The rhythm can vary from a single hit or two added at a strategic point (as in our clave example), or a full-on busy rhythm, such as a conga line.