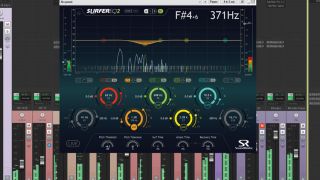 Once you fully understand the fundamentals of grouping tracks and bussing mixer channels to simplify and streamline the mixing process, you're qualified to step up to the next level.

Step 1: Use subgroups to organise your mix, and compress them. Compress the drum bus to add groove and bounce, the guitar bus to glue the guitars around each other, and so on. This can allow for a more targeted and controlled ‘glue’ effect than full mix compression, though also a little less complex, as there’ll be no interaction between groups.

Step 2: Create parallel busses called Bass, Mids and Treble, and send each track to the most appropriate one: kick, floor tom and bass guitar to the Bass bus; snare, electric guitar and vocal to the Mids bus; and drum overheads, acoustic guitar and maybe female vocal to the Treble bus. Compress each bus to glue those elements, and blend in the mix to taste.

Step 4: Compress your guitar group, with the sidechain keyed from from the lead vocal, so that the guitars duck down when the vocals come in, and ride up again afterwards. You probably won’t want more than a dB or two of this at most. Compressors with a Range parameter are useful, as you can then control the amount of ducking very precisely.

Step 5: Use a multiband compressor with a sidechain input to duck just the low-mids of your guitar group when every snare hits. Multiband ducking can also provide a subtler version of the famous ‘kick-ducks-bass’ trick, where your kick only ducks the low frequencies of the bass instead of the whole signal.

Step 6: Finally, use Sound Radix Surfer EQ to process a guitar group, with your lead vocal piped into the sidechain input. Set a bell cut or two to track prominent harmonics in the vocal part, with the Gate function set so that the cuts are only active when the vocal is present. It’s a pro trick, but it can achieve that necessary separation in vital frequency areas.