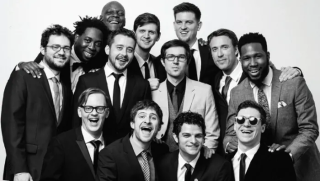 Formed in Denton, texas, in 2004 and now centered in Brooklyn, New York Snarky Puppy is a musical collective of nearly 40 musicians who shot to acclaim with a unique brand of engaging instrumental funk.

The group includes the great keyboardists Cory Henry, Shaun Martin and Bill Laurance. Let’s take a closer look at some of the keyboard techniques used by members of the band.

Ex. 1 looks at the style of Snarky keyboardist Cory Henry. Henry was originally a gospel organist, so this example delves into his Hammond work. Set your drawbars to 888000006 on the top manual and to 808 on the bottom. Note that in most gospel organ playing, the bass part comes from the organ’s pedals and that many organists play two-handed chords on the bottom manual. Here in bar 1, we have diatonic chords from the key of Bb with a moving bass line that creates nice inversions of the chords. At the end of bar 1 we have a few notes from the Bb major pentatonic scale (Bb, C, D, F, G, Bb). In bar 2 we see the useful device of alternating Bb major and C minor triads that move down in inversions. At the end of the bar, hold the Bb and switch your Leslie speed to fast. Bar 3 repeats the first chordal motive. In bar 4, we add some bluesy Db minor triads built from notes of the Bb blues scale (Bb, Db, Eb, E, F, Ab, Bb).

Ex. 2 illustrates another color you will hear in Snarky Puppy’s music; a synth patch playing repetitive chords with a slowly evolving filter that opens and closes to add resonance to the sound. Cheers to keyboardists Shaun Martin and Bill Laurance who play everything manually. To simulate their playing in our example, I cheat a little and use an arpeggiator. Notice how in this example, the right hand holds “open sounding” fourth shapes that, when played at the third or seventh scale degree, form nice major 13th voicings. Make sure when playing live to have a click output for your drummer so he can lock to your tempo. These fourth “shells” are also great if you detune an oscillator to a fifth above the fundamental.

Snarky’s Cory Henry is also great on mono lead synths, as seen in Ex. 3. The key to great mono leads (besides having a great sounding synth patch) is clever and subtle manipulation of the pitch and mod wheels. The first two bars of this example are centered loosely in E minor and the last two bars are based in C minor. But once we start moving our wheels, we kind of throw tonality out the window. In bar 1, we slowly slide all the way up with the pitch wheel (usually the one on the left), coming gently back down in key. In bar 2, we play notes from the E minor pentatonic scale (E, G, A, B, D, E). On beat 2, we move the mod wheel all the way up to get some vibrato. (On most instruments, wheels can be assigned to do just about anything you want them to.) The bar ends with another pitch wheel manipulation. In Bar 3, we switch to some fourth shapes again, this time as arpeggios and in triplets. In the second half of the bar, we push up the pitch wheel and keep playing our line normally. The line has now been pitched up and out of the key for cool sounding “out” lines.

Ex. 4 is inspired by Cory Henry’s signature work on the Rhodes electric piano, complete with delay and use of the classic MXR Phase 90 phaser. In the first two bars of our example, a fat, root position Dmaj9 voicing sustains while the left hand plays a melody emphasizing the #11 from the D Lydian Scale (D, E, F#, G#, A, B, C#, D). In bar 3, the left hand continues to outline an Abdim7 chord while the right hand plays a dissonant diminished cluster. When you want a crunchy diminished voicing, just take one note of the root position chord and raise it up a step.

Cory Henry is a masterful soloist on acoustic instruments as well, as seen in Ex. 5, which is inspired by his solo on John Coltrane’s classic jazz composition Giant Steps. Henry’s piano solo is based around a repeating left-hand ostinato figure in 7/4. For this example, our bass line features an inner moving line that “rubs” between the flatted sixth and fifth scale degree. Our improvisation happens over the bass line in C, so we keep our chord changes in the right hand as triadic arpeggios that have been notated over the passage. After our twisty line ends in the fourth bar, we insert a dissonant dominant chord.

“Snarky Puppy’s keyboardists are constantly manipulating the drawbars and settings on their various instruments, so don’t be afraid to experiment with yours!” says keyboardist and composer Brian Charette, who has performed and recorded with artists such as Joni Mitchell, Michael Buble and Rufus Wainwright in addition to leading his own jazz groups. Charette won Downbeat Magazine’s “Rising Star Organ” award in 2014 and recently released the album Alphabet City. He also has a new book out entitled 101 Hammond B-3 Tips: Stuff All the Pros Know and Use. Find out more at briancharette.com.