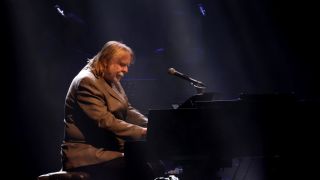 When I was coming up as a young musician, Yes was the band that changed the game for me. I loved the masterful musicianship of keyboardist Rick Wakeman, along with the soaring arrangements in their songs. Wakeman’s seemingly effortless command over his mammoth keyboard stack mesmerized me, as did the way he infused classical themes into his music. He was also one of the first keyboard artists to embrace new technology such as the Mellotron, the Minimoog, and ARP synthesizers. Wakeman was the first true keyboard showman I had ever seen, with a stage presence as imposing as his finger dexterity. Here are five ways to “Wake” up your own playing.

1. Solo Lines
Rick Wakeman often plays cascading single-note lines for solos and as fills, as well as harmonies to guitar parts. Ex. 1a is an approximation of the fill Rick does in the iconic Yes song “Roundabout” right before the 2nd verse. Ex. 1b is reminiscent of the line he plays in the choruses. The goal is to play these lines as evenly as possible. Note that both of these solo lines are played on keyboards with an extremely light action, such as a Hammond B-3 or an analog synthesizer.

2. Chording
Wakeman was also known for his sideman work outside of Yes, with artists such as Cat Stevens and David Bowie. Ex. 2 is an approximation of the intro Wakeman plays on Cat Stevens’ “Morning Has Broken.” Notice how he imparts an almost neo-baroque flavor to the harmony by pedaling the bass notes in measure pairs 1–2, 5–6, and 7–8. This technique is especially effective in measures 5–6, where holding on to the B in the bass creates a diminished-sounding tension that resolves back to the I chord in measure 7. Also, the push and pull of alternating the measures with both eighth- and sixteenth-notes adds an even greater degree of musical interest.

3. Solo Pieces
Usually, Wakeman’s solo pieces are classical in nature, but he’s also been known to mix them up with rock, blues, and even ragtime as well. On Yes’ Fragile album, Wakeman pays homage the classical composer Brahms with his solo piece “Cans and Brahms.” He does the same on the album Yessongs with “The Six Wives of Henry VIII.” Ex. 3 is in the style of one of the more challenging sections of that song. Notice how Wakeman uses ascending suspended arpeggios over the tonic to create tension and excitement.

4. Outside Influences
A great feature of Wakeman’s playing is the fact that he doesn’t take himself too seriously in his music. Even in a spotlight solo piece like “The Six Wives of Henry VIII,” Wakeman still manages to impart a comedic tone, injecting a silent film era-like musical interlude to lighten the mood. Ex. 4 is an illustration of how he does just that.

5. Left Hand Technique
While much of Wakeman’s acclaim comes from his right-handed pyrotechnics, he’s certainly no slouch with his left hand. Ex. 5 is similar to his opening piano solo on the Yes song “Awaken,” from their album Going for the One. Here, Wakeman proves that his left hand is just as quick as his right.