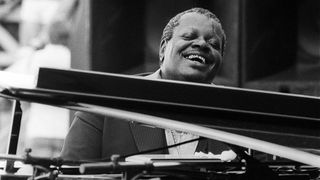 Oscar Peterson was the first pianist I ever heard. His combination of musical ideas and confidence inspired me with its deft marriage of drive, swing, and precise execution. Peterson's blend of bebop and blues has always carried an uplifting message for me as a listener, even long before I ever analyzed his playing theoretically. The harmonic colors he developed range from lyrical to big band-like block chord passages, so I've tried to profile a wide range of them here.

Peterson's frequent use of block chords always reminded me of the sound of a big band sax section. He often uses seventh, ninth, and especially sixth chords in his right hand, with the top voice doubled in the left hand. Practice tip: Try playing block chords in every possible inversion to complement the melodic idea at hand.

This is a 12-bar blues form in the key of Eb containing left hand bass notes Peterson often used in solo piano performances, and right-hand lines which can be used in a variety of harmonic situations in different keys. Also note the flatted fifth, a key point of tension and release in Peterson's playing.

Peterson always has a way of presenting potent ideas over ii-V-I chord progressions. Many of his phrasings remind me of how a comedian can deliver a powerful punch line at just the right time. Here, we illustrate a few such ii-V-I devices.

This demonstrates Peterson's trademark unison octave style over a series of dominant chords. These phrasings can be used as single-line runs over chord changes stated in any appropriate situation. Pay special attention to Peterson's impeccable sense of time, creating musical resolution at the right moment.

Ex. 5. Stride Piano
Here's another fervent force in Peterson's music. He uses stride devices often, playing the root on the first beat and the chord on the second beat, or alternating roots and fifths as bass tones and chords on the second and fourth beat, respectively. He also uses the broken tenth in his left hand (breaking up the normally combined stride interval of a tenth) with his right hand soloing over it.

Get That Swing!
"One of the most important aspects of Oscar's playing is his use of accents to imbue his music with swing," explains Grammy-nominated pianist Eldar Djangirov.