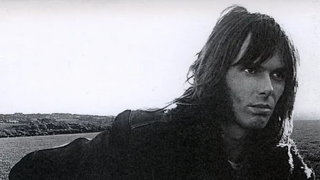 British keyboardist Nicky Hopkins was one of the most prolific English session musicians of the 1960s and ’70s. He began playing piano at age three, and in his teens he won a scholarship to the Royal Academy of Music in London. Hopkins worked with a pantheon of rock royalty, including the Who, the Rolling Stones, the Beatles, the Kinks, and Cat Stevens. Sadly, Hopkins died in 1994 at age 50, but his legacy lives on. Let’s investigate some of Hopkins’ sound further.

Ex. 1 illustrates intriguing harmony moving over a descending bass line. Piano parts from this era often had a right-hand quarter-note groove with a descending bass underneath. Notice in bars 2 and 3 how we quickly modulate to unusual key centers. Always be on the lookout for ways to re-harmonize a bass note. It can become an inversion of a new chord or a great pivot to a new key. Notice the 4-3 suspension in the right-hand part at the end of bar 2. This is a great way to create a gentle dissonance in the line. In bars 4 and 5, I snuck in a few jazz chords. Use them sparingly, though. In pop music, triads reign supreme!

Ex. 2 was inspired by Hopkins’ piano work on the Rolling Stones classic “Angie.” Notice the rolling left-hand part built of mostly roots and fifths with a few harmony notes to augment the right-hand fills. In bar 1 beat 3 of the right hand part, we see a very common Hopkins device; a sus2 embellishing the third scale degree. These rolls are very present in his playing and when used correctly, create just the right amount of ornamentation in the part. In bar 2 the left hand harmonizes a right-hand line in thirds with notes taken from the E major scale. The end of bar 3 has another Hopkins roll. Practice doing these little turns on all of your chords.

Ex. 3 is in the style of Hopkins’ keyboard work on the Stones’ “Sympathy for the Devil.” This one keeps a quarter-note drone in the left hand that alternates from a lower to higher octave, while syncopated rock chords churn in the right hand. In this type of piano part, it’s very common for a I chord to alternate with a IV chord with tonic in the bass. You can see this at the end of bars 1 and 2. At the end of bar 3 we have another example of this idea, using a dominant seventh voicing by way of G#-to-A voice-leading in the left hand. On your own, try to experiment with harmonized inner voicings and diatonic passing chords when playing your piano parts. These little nuances really make a difference.

Ex. 4 is reminiscent of Hopkins’ work on the Joe Cocker classic “You Are So Beautiful” and it has a little bit of everything we’ve discussed so far. Bar 1 begins with a rolling chord that that uses sixteenth-notes to dance around the chord tones later in the bar. The bass line has the same rock approach as the previous examples, with a little variation in bar 3. Bar 2 has another roll, this time on A minor. At the end of the bar we have some diatonic chords walking down to the D/F# chord of bar 3.

Ex. 5 was inspired by Hopkins’ playing on the John Lennon classic “Jealous Guy.” This example uses a right hand diatonic melody harmonized in sixths. The left hand employs single notes because in this example, the right hand is the star! At the end of bar 2 we see another Hopkins roll, this time in the key of A. Then the last two bars play an Emin13 over C#, a great color not used that often.