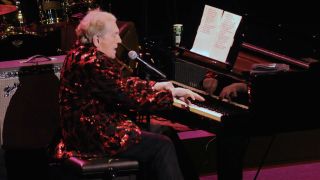 Rock piano pioneer Jerry Lee Lewis was born in 1935 in Ferriday, Louisiana. He started playing piano at the age of nine when he was exposed to gospel and church music. In 1956, Lewis signed to Sam Philips’ Sun Records and he soon became a huge star. Lewis’ new album Rock & Roll Time on Vanguard Records is a veritable encyclopedia of honky tonk, rock, and blues piano. Now, nearly half a century after he first rose to worldwide acclaim, Lewis is still a musical force to be reckoned with. Let’s take a look at a few of this rock ’n’ roll legend’s keyboard techniques.

Ex. 1 is inspired by the riffs at the end of the title track of Lewis’ new album. In the left hand, we see a typical boogie-woogie ostinato. The right hand begins with a double chromatic embellishment of the third of the C7 chord: E. The blues line here is a very common one that guitarists often use. Broken sixths harmonize the C Mixolydian mode (C, D, E, F, G, A, Bb, C), while the lower scale tones are approached with a double chromatic embellishment from above. The last bar has a Cmaj6 arpeggio ending in stabby chords.

Ex. 2 is inspired by Lewis’ playing on the song “Bright Lights, Big City.”On top of an undulating boogie riff that has an inner voice moving from the fifth to the flatted seventh in C, we then take things to New Orleans. The right hand riff begins by outlining two rather dissonant notes, Eb and A. In beat 2 we see a typical piano trick; from your pinky down roll the Cmin9 figure with a “smear” motion. Let your third finger hit both the Eb and the D. (You can throw in a lot of glissandi in this style!) The right-hand line continues in the lower octave, repeating many of the same devices. Notice how there’s a lot of chromaticism around the third all around.

Ex. 3 illustrates a classic Jerry Lee-style piano riff. On the bottom we have the third variation of our boogie bass line, and on top we have blues notes leading up to a stabby embellishment of the fifth scale degree by the “blue note,” F#. The top two notes form a “crunchy” dissonance in bar 1 and resolve down the scale to further chromatic embellishments of the third as the example progresses. Try this idea in triplets and sixteenth-note groupings too for variety.

Ex. 4 presents a few more blues licks from the Killer’s playbook with lots of grace-notes thrown in. The blues scale (C, Eb, F, F#, G, Bb, C) is always a winner in this idiom - add the E natural—and even the A natural—for color. In bar 3 we have the main event: a “shake” between the fifth and seventh of C7. On your own, try doing shakes with all the different notes in the blues scale.

“All of these examples are in the key of C, but on your own make sure to transpose them to all 12 keys so you’re never stumped on the bandstand,” says Brian Charette, who has performed and recorded with Joni Mitchell, Michael Bublé, and Rufus Wainwright in addition to leading his own jazz groups. Charette recently won Downbeat Magazine’s “Rising Star Organ” award and released two new albums entitled The Question That Drives Us and Square One. Find out more at http://www.briancharette.com.