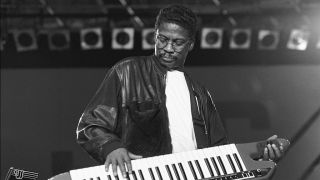 When you think of modern jazz piano, Herbie Hancock might bethe first name that comes to mind. While many know Hancock from crossover hits like “Chameleon” and “Rockit,” his influence crosses all stylistic boundaries. He began his piano career performing Mozart with the Chicago Symphony at age 11. It wasn’t until a friend introduced him to pianists George Shearing and Oscar Peterson that he became interested in jazz. Hancock soon became in demand as an accompanist throughout the 1960s, appearing on many classic Blue Note recordings. He was also one of the first jazz artists to use the Rhodes electric piano and synthesizers, not to mention vocoders and “keytars.” Regardless of the style he plays, Hancock’s playing has certain trademarks. Here are five of them.

Hancock is widely admired for his adventurous chord voicings, but the foundations of his style are actually rather conventional. Ex. 1a is a typical left hand Cmin7 voicing that Hancock might solo over.

The Cmin7 and F13b9 are tertian, or built on thirds, while the Dbmaj7 to Dmaj7 in Ex. 1b are quartal, or built on fourths.

The voicings in Ex. 1c are much like those in Hancock’s seminal tune “Maiden Voyage.” These can be thought of as chords with a bass note and a triad based on the flat seventh, which imparts a suspended kind of sound. However, musicians close to Hancock say that he typically thinks of the correlating minor sound here: For example, D7 or Dsus would be approached as Am7 over D.

I often think of Hancock as a highly creative blues musician, because there always seems to be an inherent blues component to his playing. The first examples Ex. 2a, 2b, and 2c are all reflective of his study of Oscar Peterson. These ideas have a rolling kind of sound, as if to imitate a human voice or a horn.

Ex. 2d is typical of a passage where Hancock might combine more sophisticated elements while still adding his usual bluesy inflection.

In his early career, Hancock was in high demand as a sideman because of his sensitive accompaniment. He’s known for an incredible sense of touch on the piano, and for listening while he comps, so he can interact with a soloist’s ideas while leaving space and creating drama. Sometimes, he’ll fill out a chord with what we call an upper structure, which is a triad that gives us the alterations of a seventh chord. The Eb7#11 chord in Ex. 3a is expanded by using an F triad, which is a triad based on the second or ninth of the Eb chord. Note that this voicing could also be used for an A7#9#5 chord.

The phrase in Ex. 3b is something that Hancock might play on a Clavinet, using a percussive attack between the right and left hands to get a Stevie Wonder-esque sound.

Hancock has an amazing sense of linear improvisation, at times reminiscent of bebop pianists such as Bud Powell and Wynton Kelly. Ex. 4a illustrates just that type of melodic line.

Ex. 4b demonstrates another typical phrase used by Hancock.

Ex. 4c is our old friend the diminished scale, which Hancock uses quite frequently. This scale is useful because of its symmetrical nature, which makes it ripe for developing your own patterns.

Hancock has an amazing sense of rhythmic variety in his playing. He’s able to do things like playing four-note groups of triplets, as in Ex. 5a, all the way through a chord sequence without getting lost.

He’s also known for playing strong rhythms across the bar line, such as the Gdim/maj7/Fdim7 in Ex. 5b. This is essentially a five-over-four rhythm.

Pianist, composer, and educator George Colligan has worked with Cassandra Wilson, Buster Williams, Don Byron, Ravi Coltrane, and many others. Most recently, he joined drummer Jack DeJohnette’s new quintet. Colligan has appeared on over 100 CDs, 19 of them as a leader. His latest release is Come Together on the Sunnyside label. Colligan is Assistant Professor of Jazz Piano at the University of Manitoba. Find out more at georgecolligan.com.