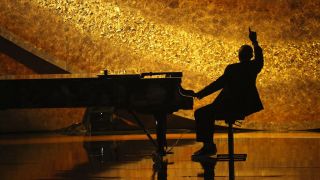 One look at Greg Phillinganes' credits and you'll quickly understand why he has risen to the top of modern music. Greg has toured and/or recorded with Michael Jackson, Stevie Wonder, Eric Clapton, Herbie Hancock, Paul McCartney, and Donald Fagen, to name a few.

Narrowing down his chameleon-like keyboard command to a mere “five ways” would be impossible, but these examples are a great way to start incorporating his ethic into your own playing.

Good keyboard solos have the sense of phrasing and breath that’s physically inherent to singing or playing a wind instrument. A great example of how Phillinganes applies this is in “One Hundred Ways” from Quincy Jones’ album The Dude. Greg’s solo is singable, tasty, and interesting to listen to. He also uses a brassy synth sound with an almost vocal quality that compliments singer James Ingram’s voice perfectly. Ex. 1 is in the style of that classic solo.

Next, Phillinganes can deliver a grooving, down-home piano part at the drop of a hat. Check out his solo on Donald Fagen’s “Ruby Baby” from The Nightfly for the an example of how he effortlessly combines “straight-ahead” Jazz, Blues, and beyond. Ex. 2 is in a similar style.

Ex. 3 is reminiscent of Greg’s synth bass line on Donald Fagen’s “Walk Between Raindrops,” again from The Nightfly. Notice how he breaks the walking bass line up, much like a real bass player would.

Phillinganes is revered not only for his dexterity, but also fo his expressive approach to everything he plays. Electronic textures seem to spring to life under his command. A perfect example of his dynamic musicianship is the synth solo from Michael Jackson’s “Bad.” Ex. 4 contains elements of that style.

Finally, Phillinganes is never one to play it safe, and often pushes a song’s harmonic limits in both comping and solo passages—but never goes too far. He did that often during his tenure with the group Toto. Ex. 5 demonstrates his penchant for mellifluous motivic and harmonic development.

“Part of why Greg Phillinganes is so sought-after is that he can cover any type of part on keyboards,” says Matt Beck, who plays keyboards and guitar with Rob Thomas and Rod Stewart. “He can easily bounce between keyboard, horn, string, and bass parts, or cover them simultaneously.” Beck also plays for the Broadway musical Spider-Man, and recently released his solo outing Anything Which Gives You Pleasure. Follow him on Twitter at @mattymay.