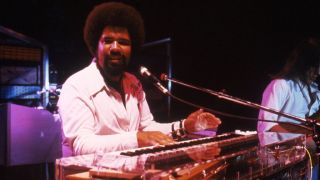 Trying to reduce George Duke’s playing to five examples is basically impossible. He has done so much in such a wide variety of styles, that what follows will only scratch the surface of his musical mastery. That being said, I’ve grouped George’s playing into different keyboard instruments, as he plays and approaches each type of keyboard in a different way. I’ve also included how George approaches playing funk to round out the list. George Duke is quite simply one of the best keyboardists on the planet and certainly one of the most eclectic ever.

When playing Funk music, George advocates really digging in more, especially on the “1.” That, he claims, is what gives you the attitude and the grease, and it’s almost more important than the actual notes you play. Ex. 1 is a funky piano groove of George’s. Notice the heavy accent on beat 1.

When playing Clav, George takes a nod from Stevie Wonder and Herbie Hancock and keeps things pretty simple in terms of rhythm. He primarily thinks in terms of a steady sixteenth-note pulse throughout. What makes things really interesting is how you break up the steady flow of sixteenth-notes between the bass and treble parts (left hand/right hand). Ex. 2 is a typical Clav comping groove that George might play.

When George plays Rhodes, he tends to have a lighter touch than when he plays piano. George attributes this to the fact that most Rhodes electric pianos have an uneven action across the key range, so by using a lighter touch you can then choose to emphasize certain parts of the phrases more than others. If you play too hard, the music won’t speak as well. Ex. 3 is a line that is similar to what George might play on the Rhodes.

George cites the Wurlitzer electric piano as an influence ever since hearing Ray Charles’ “What’d I Say” on the radio. A very soulful instrument, George claims the Wurly takes him to a place unlike any other. George tends to “bend” the notes more when playing Wurly, meaning he uses one or two consecutive notes as grace-notes leading to a stable target note such as the third. Ex. 4 is an example of his Wurly work.

George says, “It’s all about touch with piano. Many piano players play too hard and miss the nuances and subtlety of the instrument.” However, George is quick to point out that if you’re playing in a rock context, it can be useful to play harder. Ex. 5 is something that George might play on piano behind a sax player or singer.