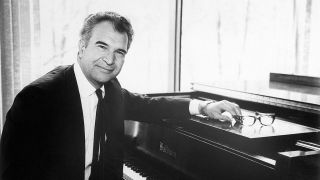 Dave Brubeck, who passed away in December 2012, just a day shy of his 92nd birthday, was one of the most influential jazz musicians of all time. Rhythms of horses’ hooves on the California cattle ranch he grew up on, along with those from water pumps, motors, and various other sources prompted his lifelong fascination with odd time signatures. Brubeck was also exposed to Bach, Mozart, Chopin, Beethoven, Debussy, and Ravel, as his mother gave classical piano lessons. Stride, blues, swing, bebop, classical, big block chords, and delicate counterpoint are just some of Brubeck’s signature devices. Let’s “take five” of them for a closer look. . . .

Scroll down for audio examples.

Many of Brubeck’s classic compositions were based on blues progressions, like “Sweet Cleo Brown,” a tribute to one of his great inspirations, blues singer Cleo Brown.Similarly, his solos were often infused with riffs drawn from the blues scale. Ex. 1 is a progression Brubeck typically used to end a blues.

Some of Brubeck’s heroes were renowned for stridepiano, like Duke Ellington, Earl “Fatha” Hines, Fats Waller, and Art Tatum. Brubeck’s large hands let him span big block chords with his right hand while playing wide walking tenthswith his left. “It’s a Raggy Waltz” combines elements of stride and ragtime in 3/4 time—one of his first forays into non-4/4 time signatures. Playing in 3/4 also let him superimpose another pulse over the beat—a polyrhythm—as in Ex. 2.

Brubeck once famously stated, “I don’t think jazz should be in 4/4 time.” His use of metric subdivisions—seen here marked in groups—was the secret ingredient that made odd time signatures sound natural and swinging to the causal listener. These broke up the measure into more digestible rhythmic phrases of (usually) two or three notes. For example, “Take Five” is more accessible when you count its 5/4 time as “one two three, one two.” Examples 3a through 3e illustrate this approach in various time signatures.

Ex. 4 demonstrates Brubeck’s renowned use of polyrhythms, or playing in more than one rhythm at a time. The rhythmic grouping of five notes in the place of four is distributed between two hands, a technique that’s been picked up by such pianists as Herbie Hancock and Chick Corea.

It was Brubeck’s older brother Howard, chairman of the music department at Palomar Junior College, who first suggested he study with French composer Darius Milhaud. During those studies, Brubeck began experimenting with polytonality—playing in more than one tonality at a time. While Brubeck is well known for his frequent display of fast pyrotechnics and dense textures, Ex. 5 exemplifies his use of space and openness.

“I was privileged to get to know Dave Brubeck when I collaborated in the group BLT [Brubeck-LaVerne Trio] with his sons Chris and Dan. Like so many musicians, my first exposure to jazz was through Brubeck’s quartet recordings. For this, I am truly grateful,” says pianist and composer Andy LaVerne, professor at the Hartt School of Music in West Hartford, Connecticut. LaVerne has worked with Frank Sinatra, Stan Getz, Dizzy Gillespie, Chick Corea, and many others. Learn more in his latest book, Chords in Motion, from Aebersold Jazz, and at andylaverne.com.