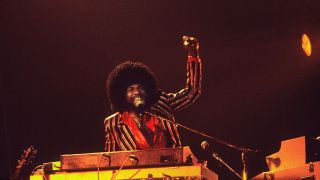 I was approximately 14 years old when I started to discover gospel and blues licks, listening to Mark Naftalin from the Paul Butterfield Blues Band and early John Mayall records. At that time (the mid 1960s), there were plenty of great blues and gospel devices to be found on records recorded in Philadelphia by the likes of Cameo-Parkway, Gamble and Huff, and others, not to mention in the Motown songs that were saturating the airwaves at the time. Nobody could rock those kind of licks better than Billy Preston; a keyboard prodigy who played with Mahalia Jackson, James Cleveland, and André Crouch at the age of ten. Preston later achieved worldwide acclaim playing with the Beatles, but he really hit his stride with his own solo records. (Watch him play "Nothing from Nothing" live below!) Let’s look at five ways to add his signature sound to your own musical efforts.

Ex. 1 is a rhythm pattern in the style of Preston’s tune “Nothing From Nothing.” Many of the phrases here seem simple, but their real effectiveness comes with proper time feel and execution. Pay special attention to how the grace-notes are used and in this case, the syncopation between the right and left hands. Patterns that go back and forth between the I and IV chords using different inversions in a descending direction are a staple of both rock and blues music and are a great tool for almost any kind of popular music.

Billy Preston enjoyed playing a myriad of different keyboards including Rhodes, Wurlizter, acoustic piano, Hammond B-3 organ, and even Hohner Melodica. Ex. 2 is a bluesy piano figure in the style of Preston’s tune “Will It Go ’Round in Circles” that at the end employs his signature descending I-IV pattern with different chord inversions. (It always works!) Check out the use of left and right hand together on the rhythms with a Bill Evans-style jazzy 13th voicing in the left hand, and mostly triads and octavesin the right.

When Billy Preston played with the Beatles, he had to adapt to their particularly rocking style of music. Ex. 3 is reminiscent of Preston’s accompaniment on the Beatles’ track “Get Back,” and shows a basic but effective open triadic voicing approach to rock accompaniment. The fifths are heard in the left hand and the right hand plays sixth intervals above containing the third and the root on top. Note the preponderance of bluesy grace-note approaches in the right hand. There’s room here to add some tasty variations without interfering with the main melodies of the song.

Ex. 4 is a gospel-inspired passage with simple, open-voiced, triadic chord movement. Never forget that what seems simple can often be very effective. In this situation, the art of accompaniment is in providing solid support and simple ornaments that keeps the track interesting without detracting from the vocalist or melodic instrument. I like triadic approach chords (like those seen at the end of the second bar), and I often try to add them when they make sense in a particular musical situation.

Ex. 5 is an eight-bar solo in the style of the one Preston played on the Beatles’ “Get Back.” Note how it references the verse’s melody. It’s always a good idea to recycle melodic material from a song in your solo, in order to keep everything on track thematically. Notice the use of melodic fourth intervals in bar 3, as well as contrasting syncopated and straight phrases and the use of blues licks.