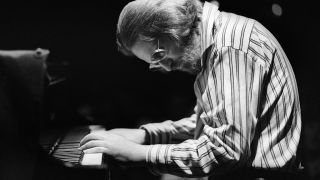 It’s hard to believe it’s been 30 years since the revolutionary jazz pianist Bill Evans left us at the all too young age of 51. Evans was, and still is, among the most influential jazz pianists of the past sixty years. His effect on modern jazz piano was so profound, he actually influenced pianists whose fame both followed his own (Herbie Hancock, McCoy Tyner, and Brad Mehldau), and preceded it (Teddy Wilson, George Shearing, and Oscar Peterson). On both sides of this generational divide, pianists who heard Bill Evans altered their own playing as a result. There’s no doubt that had Bill survived to his 81st birthday, he would have added many more ways to this “five ways” list. He left it to us to add to such lists ourselves. That’s what he wanted, after all.

Bill Evans single-handedly changed the sound of jazz piano—literally, with his left hand! His four-note, rootless chord voicings consist of guide tones (thirds and sevenths), along with chord tones, color tones, extensions, and/or alterations. These compact voicings also have inherently smooth voice leading. Ex. 1a is a ii-V-I progression in the key of C. Play these voicings with your right hand while playing the roots with your left to get used to the root movement. Then play them with your left hand alone. To practice, transpose up in half steps to the key of F. This position is often referred to as the “A-form.” Ex. 1b shows the “B-form” of these voicings, and covers the keys of F# major through B major. These use the same notes as the A-form, but in a different configuration.

And in Ex. 1d, we see how to construct the B-form of rootless voicings for a ii-V-i in minor.

Evans’ lyrical right-hand lines often ended up in the higher reaches of the keyboard as a result of the position of his left-hand voicings. Ex. 2a illustrates how Bill often used the notes from his left-hand voicings in his right-hand lines. Here is a signature lick of his over a ii-V-i progression in C minor. In Ex. 2b, we see his trademark scale tone and chromatic triad usage. Notice the triad pair of Eb major and Db major over the G7 altered (#9b13) chord. These triads are scale tone triads of the G altered scale (or Ab melodic minor). The E major triad is a chromatic triad. The triads over the Cmin6 chord are all scale tone triads taken from the C melodic minor scale.

Evans was a master of both harmonic and rhythmic innovation. Ex. 3a is a series of ii-V progressions. By adding dominant seventh chromatic approach chords, Evans could enhance and expand a common harmonic progression. Note his trademark, subtle use of the grace note of the fifth going to the #5 (or b13) in the Bb7 chord. His left-hand accompaniment often created a counter-melody to the right hand, and kept things moving. Note how in Ex. 3b, Evans takes a typical II-V-III-VI turnaround progression and changes the V chord to a #II diminished chord. This subtle alteration creates unexpected harmonic interest.

Evans’ introspective style gave rise to frequent inner voice movement, which infused a contrapuntal component into his playing. Ex. 4a illustrates a favorite Evans device for a minor chord. Here we see the inner voice movement of the fifth: 5, #5, 6, b6, and 5. His use of intervallic minor thirds ascending chromatically in the right hand let him play over any harmonic movement without playing the actual chord changes.

Ex. 4b shows inner voice movement within a ii-V-I progression. Evans was also one of the first jazz pianists to incorporate strings of sixteenth-notes interspersed with sixteenth-note triplets.

Evans often jokingly referred to himself as “king of the locked hands.” This technique, first developed by pianists like Nat “King” Cole and George Shearing, utilized four-way close chord voicings with the top note doubled down an octave. Bill modernized these fourway close structures by taking the note second from the top and dropping it an octave. This became known as a “drop two” voicing. Ex. 5 illustrates this difficult but effective technique to harmonize melodies. Notice more triplets in the right hand (this time quarter- note triplets), a signature Evans rhythm.