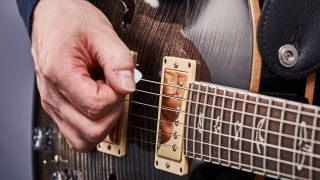 Good metal guitar playing hinges on having a tight rhythm technique, but without practice and proper technique it can feel quite physically demanding and tiring. Players like James Hetfield of Metallica and Scott Ian from Anthrax and Gary Holt from Exodus formulated the tight rhythmic, palm-muted downstroke in the ‘80s thrash metal scene.

Nowadays the palm-muted power chord is referred to as ‘djent’, a term associated with bands like Periphery and Meshuggah, although they distance themselves from the term.

Playing consecutive downstrokes at speed and for an extended period requires complete relaxation from the picking hand, and arm. A good way to achieve this is to move your hand from the wrist and let the pick ‘bounce’ on the strings.

We have five examples for you which start off using short bursts of notes. This will allow you to relax during the rests and dispel any muscle tension before it becomes incapacitating.

First of all make sure you have a good tight sound, using just enough gain to get the amp to ‘bark’, but not so much that the tone becomes messy and indistinct. A lot of metal players favour a softer pick, which produces a more cutting tone and also glides through the strings without bending them sharp.

Also try angling your pick in different ways to see how the tone is affected. For this style it is normal practice to hit the string with the edge, rather than the fl at of the pick. Slightly angling the tip of your pick up towards your face is also useful as this will clear the pick away from the strings during the silent ‘upstroke’, which happens between each downstroke. Think of the pick moving in and out of the strings as well as down and up.

Ease yourself in to the technique with Example 1, which features some short bursts of energy. There are three muted downstrokes, followed by a sustained power chord. At the end of each repeat we double up to six downstrokes, which should help you develop consistency and stamina.

In Example 2 you can exercise that stamina for a much longer period. Here we have six beats of eighth-note triplet downstrokes, with a brief respite at the end, as the picking halves in speed to quarter-note triplets.

Example 3 is a bit more demanding as it is based on the faster 16th-note subdivision. Once again we have incorporated rests to enable you to develop the speed in short bursts.

Example 4 introduces the ‘hand bounce’, which is used to instantly switch between a muted and a sustained sound. Although this Panterainspired riff is essentially one chord throughout, the muted and sustained accents create a cool syncopated groove.

Our final example is a single-note riff inspired by Killswitch Engage. The focus here is on moving cleanly from string to string and also skipping over strings. Downstrokes also make pinched harmonics possible; great for adding texture and interest to low-string riffs.

Keep your picking-hand palm against strings at the bridge and play three tight downstrokes in beat 1, then play a sustained power chord in beat 2 by lifting off your palm as you play a fourth downstroke. Repeat this three times, then finish with six consecutive palm-muted downstrokes.

Play the consecutive eighth-note triplets while moving your hand loosely from the wrist. At the end of bar two halve the speed of your picking to quarter-note triplets. This will give you a couple of beats to relax and dispel any tension which may have built up.

Play a quick burst of five palm-muted downstrokes, followed by a rest. Notice that the fifth power chord is played across four strings in order to add some extra emphasis to the snare drum. Keep the rests silent by muting the strings with both your fretting hand fingers and the side of your picking hand palm.

The focus on this riff is accenting, so note which chords are palm-muted and which are sustained. For the sustained chords, lift your palm-mute away from the strings by a few millimetres to let them ring. Practise each four-note group separately first in order to learn the patterns before joining them all together.

This riff is played in dropped D tuning so start by tuning your sixth string down a tone. Keep all sixth-string notes tight and palm-muted while lifting your palm off for the melodic notes on the fifth string. Bar 2 features some pinched harmonics so lightly touch the strings with the side of your thumb as you pick.