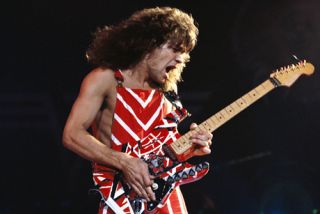 A quick search of t'internet will throw up all sorts of rumours, rehashed and chewed-over, concerning '...a new Van Halen single with an album imminent...!' or '...a huge Van Halen world tour starting in Australia and then taking in first the US, then Asia, South America and European festivals...!'

We're not saying that a Saturday evening headline slot at Download, Sonisphere or even T In The Park wouldn't be an exceedingly welcome occurrence but, with Halen's status seemingly about as stable as Dawn French sat on a two-legged milking stool, we have our doubts whether all this will amount to more than a hill of beans.

The producer of The New VH Album™ Ross Hogarth told UltimateClassicRock.com: "The whole Van Halen record has been recorded and we're all excited… I'm really stoked about it, as it is the original band, Eddie and Alex with Wolf playing bass, and David Lee Roth singing."

Not quite the full original line-up, though, is it...?

Alter Bridge guitarist Mark Tremonti, guy we admire, like and trust, has been saying he's actually heard some new material. "So I was one of the only people who have heard the new Van Halen. It was incredible." He gushed recently. So that's a positive.

The truth is this: even if the new album is as good musically as the seminal 1978 debut Van Halen, it'll still be merely an above average rock album and that's if it actually sees the light of day.

What made the band great back then is that everything was new: nobody played guitar like Ed, commanded a stage like David Lee Roth, thumped as many drums as Alex Van Halen or sang as high as Michael Anthony.

Oh yeah, Michael Anthony. The whiff of nepotism surrounding the recruitment of Ed's boy Wolfie to bass duties is still too cloying for us to take seriously, and Mikey's high backing vocals were as much a part of the classic VH sound as any of DLR's post coital screeches. Still...their loss is Chickenfoot's gain.

Any electric rock guitar player owes a huge amount to Eddie Van Halen and the stars he influenced, but are Van Halen in danger of piddling on their own legacy? Time - and the fruition of all the rumours currently circulating - will tell.

But we sincerely hope it's close to this because - sheesh! - they were magnificent...