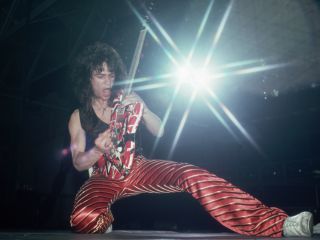 As let-me-entertain-you star-turns go, Eruption had it all: inventiveness, passion, joy and a whole lot of daring-do. Oh, and that tapping thing, too. Though Eddie has always owned up to the fact that he didn't invent the technique per se, he brought it to the attention of rock's mainstream in a way that was seen as revolutionary. A sonic Shot Heard Round The World.

Thirty-three years after it first appeared on Van Halen's 1978 debut album, it's still turning heads, dropping jaws and causing carpel tunnel syndrome in millions of guitarists who routinely attempt to divine the mystery of its alluring power. Admit it: you've probably tried it yourself.

Yes, you have. We have proof. We've picked a truckload of videos - some are great, others are...well, you'll see - in which amateur guitarists (a fair amount of kids at school talent shows...what's up with that?) go Eruption-crazy. We've got 33 of them, in fact, one for every year Eruption has been driving music store employees the world over insane.

First, here's Eddie himself in a blazing live version, 1994.

Guitarwannabee goes for it, although he does say it's "take two."

Eric rocks out at his school talent show. And yes, he does need that whammy bar.

An 11-year-old shredder puts his own unique spin on Eruption. Did we mention he's only 11?

GuitarHero1961, who calls himself an "old guy," lays it all out.

Tim knows the only way to impress co-workers is by whipping out a lame version of Eruption (he said it, we didn't). He made it extra loud, too, for the guy in the next cubicle.

This "insane" 11-year-old kills on his SG. SGs are big with the young 'uns.

A little Eruption at school always draws a crowd. (Is it just us, or does theevdisciple look a tad old to be a student? Just asking.)

Who says only boys can be guitar heroes? Danna shows everybody how it's done. (Some debate whether she's really playing or not. What say you?)

Twelve-year-old Taylor knocks out Eruption as well as The Kinks' You Really Got Me.

Taylor scores again, this time by playing Eruption backwards. We've never tried this, so we'll take her word for its accuracy. In any event, she got mom to stop ironing.

Mike Miller's instructional video that some call a by-the-numbers yank-fest. You decide.

Eruption on acoustic? Rick's younger brother, on leave from the army, proves you don't need electricity to create sparks.

There's a bit of Twilight Zone in this acoustic rendition...

The unknown guitarist, neo4311, has his A game on for this acoustic workout.

Eruption on piano? Believe it.

Ahhh, the tinkling of the eighty-eights!

Even five-string bassists can get in on the action.

You friend throws down a challenge? Three days of practice is enough.

Geez, do kids do any studying at school anymore?

Your band split? Steackmike has an answer for that.

Eddie covered on an Ibanez Steve Vai Jem7? And what wrong with that?

The school talent shows are alive with the sound of Eruption. These guys kick the Jonas Brothers' butts!

Tyler's got a striped guitar and he's gonna use it!

He asks you to be kind, so please...be kind!

Frank's a shred king. He offers lessons, too.

Last but not least...Ukulele Eruption!!