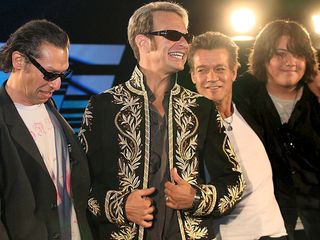 Although many consider the possibility of a new Van Halen album as something right out of science fiction, the fan site Van Halen News Desk (VHND.com) reports that a "trusted source" says the band is making smooth headway on an upcoming CD, stating that the process is "going great and the band is starting to mix the new tracks."

According to the site, Van Halen are looking to release the John Shanks-produced disc in the fall, and then will tour in support of the record. None of these claims have been confirmed by anyone in the actual Van Halen organization.

When (and if) the album materializes, it would be the first full-length studio release from the band since 1998's Van Halen III (which featured singer Gary Cherone, who replaced Sammy Hagar, who replaced David Lee Roth; Roth, of course, is now back in the group). It would also mark the recorded debut of Eddie Van Halen's son, Wolfgang, who replaced original VH bassist Michael Anthony during 2007's "reunion" tour.

So who can't wait to hear some new Van Halen? Michael Anthony, for one. According to Blabbermouth.net, he told ABC News Radio, "I'm looking forward to seeing what they'll do." He went on to say that he held no ill will toward his former bandmates for replacing him with Wolfgang.

There are doubters, however, chief among them Sammy Hagar. During a recent interview with MusicRadar, the singer (whose autobiography, RED, just his No. 1 on the New York Times Best Seller List) said that didn't see a new Van Halen record happening:

"Look how long it's been," he said. "They've had every opportunity. Eddie owns his own studio. His brother's his drummer and lives about a mile away. They have Wolfie on bass - they had Michael Anthony for a while, and they had him sittin' on his ass for years and years. And they've had two singers - me and Dave. With all of that, they haven't made a record in… who knows when?

"If it takes that long to make a record… I just… I don't see a new Van Halen record happening. I don't see Dave and Eddie being able to work it out. I've heard stories about what's going on. And I don't see Wolfie and Dave working in the same studio together. I don't know…"