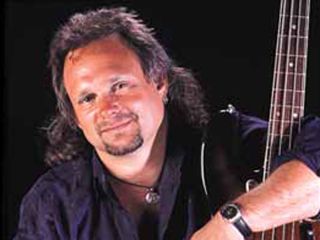 "I never quit Van Halen," says bassist Michael Anthony, who is now part of the red-hot supergroup Chickenfoot. "No way. And the funny thing is, I don't even know why the subject is coming up anymore."

The reason stems from a recent interview guitarist Eddie Van Halen gave to Rolling Stone - the guitarist was asked if he had heard Chickenfoot, which in addition to Anthony, includes former Van Halen singer Sammy Hagar.

"I'm too busy doing my own thing," Van Halen said, who then, completely unprovoked, went into this tirade: "The funny thing is that everyone who quits the band always claims they got fired by me. Hey, I'm not the bad guy here.

"When Hagar left the band, Mike went with him," Van Halen continued. "Then when we get back together with Dave, and all of a sudden, he wants back in. It's like, 'No, dude, you quit the band.' So my son became the bass player. But we didn't give Mike the boot to have my son play."

Michael Anthony, speaking exclusively to MusicRadar, disputes Van Halen's assertions. "Why would I have quit Van Halen? It never happened. And what's weird is, he was being asked about Chickenfoot, whether he had heard us or not, and suddenly he launches into this thing about me quitting the group. What does one thing even have to do with the other?"

Anthony, who says he had to take a pay cut and sign away his rights to the Van Halen name and logo to take part in the 2004 tour the group did with Sammy Hagar, admits that he was stunned to find himself out of the band when they announced their 2007 reunion tour with singer David Lee Roth - an arena run that saw Eddie's son, Wolfgang, on bass.

"I found out about that tour like everybody else did - in the press," says Anthony. "I had no idea. At that point, I kind of sighed and went, 'Whatever. If this is what Eddie wants to do, he's going to do what he wants to do.' If he wants me out of the band and for Wolfgang to play bass, what was I going to do about it?

Even so, the bassist wants to make one thing clear: "I never 'quit.' I never once said, 'I'm out of here.' It never happened. That's the weird thing right now, for Eddie to be trying to paint himself as 'not the bad guy.'

"You know, it's weird to be talking about all of this right now," he continues, "because I'm in such a good place with Chickenfoot. The album we made, the shows we're doing, everything we're all about - we're having a blast. And the fans are digging it and they're responding."

"Eddie says he hasn't heard Chickenfoot, and I believe him, because it's true, he doesn't really listen to anything," says Anthony. "But instead of trying to rewrite the past and talk shit or whatever, he should see what we're doing and go into his studio and make some music. Make music, have some fun. Don't just talk - do!

"Ultimately, all's well that ends well," he says. "I just find it odd that I'm put into a situation where I'm forced to defend myself. Everything is great in my world and I couldn't be happier with the group I'm in. But I don't want people to think I quit Van Halen, because I didn't. It never happened."

MusicRadar contacted Eddie Van Halen's publicist for a response, who indicated that the guitarist was unable to comment further on this matter.

Liked this? Now read: 12 best amps for heavy metal, The top 10 stompboxes we can't live without and 10 best bass guitars under £300