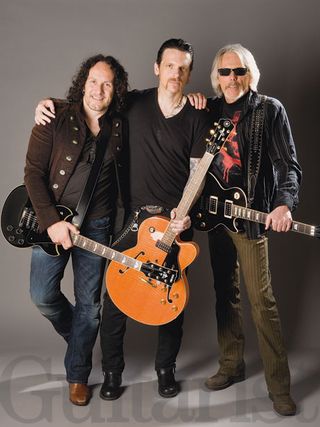 Def Leppard's Vivian Campbell and The Almighty's Ricky Warwick are the new guitar recruits joining mainstay Scott Gorham in a refreshed Thin Lizzy line-up for a January 2011 tour. We chat to all three in issue 332, in shops July 6, following their very first rehearsal together.

Viv, Ricky and Scott talk candidly about the guitars and amps they've used over the years, what they'll be using on the Lizzy tour and also how vocalist Ricky will fit into the band's famous twin guitar sound. Now here's something extra that's not in the mag's feature: Scott talks about the long-awaited plans for Thin Lizzy's classic albums to be remixed and remastered…

There's been talk of remastered and remixed versions of the classic Lizzy albums for the last few years, is it going to happen?

Scott Gorham: "Well I've been talking to the guys at Universal - it's called a deluxe album where you get the original remastered and the second disc will either be the whole album remixed or tracks cherry-picked off for that treatment. I'm actually talking to [Def Leppard frontman] Joe Elliot about going into his studio and doing it there in Dublin. We've been talking about that for a few years and now Universal is onboard it's now a matter of finalising all the costs to do it."

Do you know when they might surface - this or next year?

"We want to get in this year and start the remixes. We want to get onto it as soon as possible, especially since we've got free time now."

Do you feel that Lizzy never really captured their live dynamic on record?

"Absolutely. For some reason the kind of band that we were we could never really capture that in the studio and I'm not quite sure why that is. I'd hear the energy of the guys and how we're playing at that point in the rehearsal then we'd go in to record those same songs and to me it sounds like a fucking cocktail album! We missed the boat. Especially on the Nightlife album - I'd like to cherry pick a fair few of those songs and re-do them now. You keep Phil and keep his bass parts but see what we could do now - see what the songs turn out like now."

Read our interview with Scott Gorham, Vivian Campbell and Ricky Warwick in issue 332 of Guitarist magazine - in shops July 6.