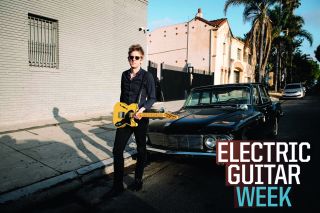 ELECTRIC GUITAR WEEK: Is there a secret?” ponders Spoon singer/guitarist Britt Daniel when asked how he wrote his band’s most popular indie-rock anthems. Is there, perhaps, a stage of the process that might be unique to him? He takes a moment to think about it.

“I’m not really sure, to be honest. What I usually do is, to put it dramatically, go into some kind of trance. You have to get lost in what you are doing. That’s how I create, getting totally absorbed in chords and then coming up with strong melodies on top of them.”

The Spoon leader also points how, while stockpiling ideas is all well and good, it’s the selection process of what to build on further that helped cement a fruitful career since starting the band in 1993. Without this crucial point in his creative method, perhaps the Texans would never have cracked top 10s on home soil, infecting the airwaves and invading screen audiences via high-profile synchronisations into The Simpsons, Cloverfield and Spider-Man: Homecoming. Quality control, he says, is key...

“We have ditched a lot of things, yes,” he admits when we ask him about the large amount of wastage that inevitably comes with setting the bar so high. “I have tapes and tapes, hard drives and hard drives, all full of ideas that we got to a certain point and then left to move onto something else. I feel like I stick with what comes natural to me. When I listen back to what I’ve written, it has to give me some kind of shivers. If it doesn’t, then it’s time to work on a new song...

“Every now and then, I might listen back and find some way of using those things, but usually the magic happens fast. You recognise that and work quickly, because it’s hard to find. You only end up there, there’s no secret way or direct line to get to that creative place. That’s the great mystery of creativity, I guess. It can be frustrating but if you keep working, you will eventually get there. You just don’t know when!”

At Summer NAMM 2019, Fender announced the release of the guitarist’s signature Thinline Telecaster: a semi-hollow ash body with a Deep C maple neck, finished in a custom Amarillo Gold lacquer. It’s exactly why, for at least one musician, the greatest vintage for the first commercially successful electric might as well be 2019 (“I’d say we’re hitting the peak right about now,” grins Britt). Though he’s been spotted with solidbody Fenders and a 1964 ES-335 in the past, the Spoon frontman points out there are numerous advantages to the Thinline series seen on stage with him on more recent cycles...

“I’ve found hollow-body guitars will always have these extra sounds that a regular ones wouldn’t,” he notes. “To me Thinlines always felt like a Tele Plus. There’s something more unique about the tone and there’s something about the look with the f-holes. The guitars are light so I can always throw them up in the air or flip them around my back for the songs where I only sing."

"Obviously I was blown away when they asked if I wanted to do my own guitar. We spent a while tweaking it, combining different features from the yellow and white Thinlines I’ve played a lot.

"I think Fender said it took longer for them than most other signatures. They kept apologising to me and I said, ‘No, don’t apologise, I wanna get this thing right!’ I also wanted to avoid those darker metal sounds. Sure, I love the way Les Pauls sound when certain people play them, but they were never my thing. That was never the guitar playing I had in mind so I just didn’t gravitate towards it.”

Then of course there’s the fact that some of the Spoon founder’s biggest rock heroes, Joe Strummer and Bruce Springsteen, also famously wielded Telecasters, conjuring sounds that could truly bite their way through listener’s ears. There was something special, explains Britt, about that era of guitar players for both sound and appearance. He notes how both Born To Run and London Calling (“two of the greatest albums of all time”) featured Fenders on their front covers.

“Early on, when I was trying to figure out what to play, everything was always based on looks first,” he laughs. “I like the look of 335s, which I played for a long time, but the more I got into guitar, the more I wanted those scrapey sounds that Fenders have.

"The single coils add a certain rhythmic element, and that’s definitely my strong suit as a guitarist – playing rhythm. Eventually Telecasters became the guitars I wanted to use all the time and looking at my last couple of albums and tours, that’s all I’ve stuck with.”

Considering how easily the singer/ guitarist could extend his endorsement with Fender into their line of amps, it’s interesting that his main go-to head in recent years isn’t actually made by any company or available commercially whatsoever.

Former Spoon tech Matt Gilchrist – based in Portland, Oregon – built an AC30 clone that follows the band wherever they go. For fly-in shows, Daniel will rent “whatever 2x12s I can find the other end” though for bus touring “there’s an AC30 cabinet I like to run it through”.

In between, as you’d expect from the more direct sounds generally favoured by Spoon, there’s not much clogging up the signal path. Then again, if you’re lucky enough to have friends in high places, it would be rude not to indulge from time to time...

“We’ve been fortunate to get to know the guy that makes the Klon Centaurs,” he nods, admitting the band were thrown a couple of freebies which have come in handy on numerous occasions.

“Those pedals have gone a bit crazy price-wise, but there’s a good reason for that. Klon found the right way of doing what they do, you just can’t go wrong with them. Apart from that, I also really like the Boss CE-1, which I use for its vibrato mode. It sounds like an actual Leslie, with this beautiful and far-out warmth.

"And finally a Holy Grail reverb, as the Fender tanks I’ve carried around with me in the past are a little old and temperamental, and sadly they simply don’t travel well.”

A few years on from 2017’s ninth album Hot Thoughts, in between their live commitments, the band are currently completing their next record back home in Austin. Their leader confirms they’re approaching the halfway mark, though teases it could still go any way at this point…

“It’s hard to know exactly how it will pan out, but we’ve sorta had the idea of making a more rock ’n’ roll record,” he reveals. “Spoon meets The Velvet Underground’s Loaded, with even some Little Richard influence. There’s some harder vocals and less keyboards. But then while in the studio, some of it started sounding a bit dubby... which definitely wasn’t planned, but a couple of songs went there! We’ll see where it all ends up. A lot of our inspiration comes from The Beatles, Bowie and Prince – they’re the big ones, though I guess they’re not necessarily indie...

He pauses and laughs nervously. “To tell you the truth, I never really knew what that word even meant,” Britt admits, explaining how his musical education came from the radio, which championed rock music in all its forms. To his ears, an album like Crooked Rain, Crooked Rain – the second record by Californian indie heroes Pavement – didn’t sound that different to what you’d hear on a classic rock station. At the end of the day, it was still great rock ’n’ roll with big guitars.

The Texan offers similar praise for Jonny Greenwood’s quirky creations, which helped seal Radiohead’s fortune as one of the world’s most artistically fearless and sonically expansive rock groups.

"For him it was mostly how the British quintet always tried to sound “a little more foreign” in everything they do that brought the integrity to their ground-breaking music. “Now they’re a band who might object to both terms: rock’n’roll and indie rock,” laughs Britt. “But what they do really works emotionally. It’s almost like their musical intent is to create this massive distance... and it really does.

It was the 1995 single Just from Radiohead's second album The Bends that converted Britt – more specifically the moment “where the whole band fall into nothing for a couple of seconds” and Greenwood starts “wrestling with feedback and noise” before the final chorus.

"He likens the Radiohead guitarist’s importance to that of Jimmy Page, describing both musicians as master orchestrators whose imaginations were able to run wild. “Led Zeppelin created more expansive and elaborate arrangements than Chuck Berry and whoever else they were influenced by. It definitely wasn’t trad. In fact, it was all over the place, far out and sometimes even bizarre. The same goes for Radiohead. As they went on into albums like OK Computer and Kid A, they took their experimentation even further. That’s something we can all learn from.”

Classic gear tuners: “I wanted something that didn’t look modern. I saw these on some old Tele and wanted to get them on there. The first prototypes had ones that were probably more usable... but I really didn’t want them to look modern. These are old-fashioned but very functional. They operate properly, unlike other old-school ones which are less reliable.”

S-1 Switch: “That’s very handy, at least for my purposes when I'm recording. You spend some time getting the amp sound right and repositioning the mics, then you’re sitting there in the booth or whatever and it’s one more option you have that you can throw out really fast. It can be a secret weapon!”

Deep C maple neck: “Everybody’s different. We all hold and play the guitar differently, but this neck feels the easiest to my hands. I had a guitar player a while back who could not stand this kind of neck, they just didn’t work for him, but it’s total the opposite for me.”

Amarillo Gold lacquer finish: “It is an original Fender paint colour, but they’ve never used this exact one. We went through four prototypes to get the colour right... which wasmorefunformeasI had more guitars piling up at my house. At first it was a little too light, then too peachy, then we honed in on exactly what we wanted it to be. And since it was a brand new colour... we decided to name it!”