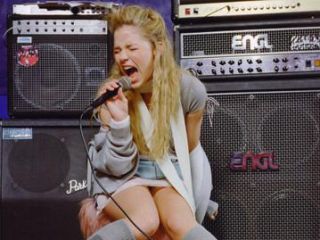 For many, loud music means high energy, excitement and emotion, recalling the atmosphere experienced at a live rock concert or on a club dance floor, where you're overwhelmed by aural and physical sensations.

Cranking up the volume can be enjoyable, no doubt about it, but knowing why that is - and when it's appropriate to do so - could make you a better musician.

There are very real reasons why high-amplitude audio holds such appeal. Did you know that there's a tiny organ in the inner ear called the sacculus (once thought to have no function in our auditory system) that's linked to a region of the brain associated with the response to pleasure?

It's now known, according to the research of Dr. Neil Todd, that it reacts to low-frequency vibrations over 90dB. It seems both live and club music are tailor-made for sacculus stimulation.

Academic and lecturer Dr Barry Blesser suggests that "raising the loudness of music, like a double shot of whisky, elevates the intensity of the experience". Listeners undergo significant, measurable changes in mind-body states and Blesser reckons that "loud music is simply a stronger stimulant than soft music".

He maintains that it places us in another "aural space" by masking other sounds and somewhat removing us from our immediate environment, altering our frame of mind. It's fascinating stuff, and we recommend reading Blesser's study, The Seductive (Yet Destructive) Appeal of Loud Music, in full.

One fellow who knows all about the physical nature of cranked-up music is heavyweight DnB producer Lemon D, who co-owns the famous Valve Sound System with Dillinja. Said to be the only system in the world designed specifically for drum 'n' bass, this 96kW touring behemoth contains no less than 52 sub woofers and requires three lorries to shift it.

"Bass is literally non-existent in many clubs," says Lemon D, "but it is an integral part of the music! Why include it at source, only to remove it when it's played? Bass is one of the most important factors in any form of dance music - it stimulates us mentally and physically."

The audience are often handed earplugs at Valve shows to protect their hearing, but Lemon D explains, "It's not really that loud. If you go into any bar and there's loud music, you'd need earplugs. What makes our system feel louder is the bass and overall EQing. Bass doesn't give you tinnitus - high end does. The reason people wear earplugs is that some insist on partying all night in front of the speakers - this is absolutely nuts! It's best to move around, then you won't be subjecting yourself to loud music [all night]."

Unfortunately, record companies cottoned on to the 'louder is better' theory some time ago, resulting in the so-called loudness war, whereby CDs are commonly mastered to have as high an average level as possible. Sadly, this is always to the detriment of sound quality.

"The over-squashing of dynamics is just wrong, period - it's only going to tire your hearing," says Lemon D. And making your tracks stupidly loud to rock the dance floor harder doesn't work either. "If music has been mastered to distort, it'll sound distorted on the system. The best thing music-makers could do is to come down a few decibels, then just turn the level up on the sound system. Producers used to do this and it sounded great."

Bob Katz, world-renowned mastering engineer and author of Mastering Audio - The Art and The Science, concurs: "Loud music only sounds 'better' instantly. If it's constantly loud, it becomes fatiguing. When a 20-year-old Tom Jones or a nice R&B number gets played on the dance floor, the quality is obviously better than much of the current stuff."

But isn't it good practice to 'use all the bits', to avoid noise issues and preserve quality? This is a myth that Bob is happy to debunk. "It's quite easy to prove," he says. "First of all, the dynamic range of the 16-bit medium is already wide enough to master a Beethoven symphony in which the average level on forte passages is -20dBFS, and which may never hit full scale.

"When the soft (mezzo-piano) second movement comes on, you don't turn up your monitor gain to make it louder, because it sounds wrong. It's designed to be listened to softly. Start with that soft movement. Set your monitor gain so that it sounds right, then stop the CD player - do you notice any hiss or noise from your system? Of course not. This tells you that the signal-to-noise ratio of CD is just fine for classical music.

"Turning up any rock or electronic music in a specious attempt to make it 'louder' fails to improve the audible signal-to-noise ratio in any way beyond the classical 'benchmark'. All it does is force you to turn your monitor level down, and if you over-compressed or over-processed it, the sound quality also goes down."

"The noise floor of the 16-bit medium is -93dBFS RMS, and of 24-bit, -144dBFS RMS! A good quality DAC comes in at -120dBFS RMS… Unless the hiss approaches -70dBFS RMS, you won't even detect it. If you under-record by about 20dB, then you might hear the noise of the conversion stages.

"So, when mixing, there's absolutely no advantage to peaking to full scale (and some disadvantages, in the form of distortion), and there's no need to use any 'protection circuitry' or 'soft limit' in the converter. Close your eyes, stop trying to peak the meters and start making better-sounding recordings. When sending a recording for mastering, a level of about -3 to -10dBFS on the highest peak of the music makes a more than adequate digital recording."

Words of wisdom, indeed, and if you're really keen to reclaim some of that lost dynamic range, then you should investigate Bob's K-System metering scheme, which he describes as "a guide for mix engineers who are getting started and looking for a help in producing good-sounding recordings."

Finally, although we haven't covered the damage caused to hearing by loud music in detail, the last word goes to Dr Barry Blesser: "Like every stimulant, moderation rather than excess is often the best compromise."