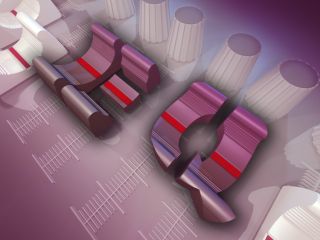 One of the most essential studio tools.

A quality equaliser can be a corrective lifesaver, or give a whole new character to a sound. Understand how EQs work and you'll be able to get the best out of them.

Do you know what separates the classic professional mixing desks from the cheap, mass-produced consoles that line your local music shop?

If you said "the preamps", you'd be right - but you'd be equally right to single out the EQ. This statement may seem suspect to the studio newbie, but any veteran console jockey will confirm our assertion.

Granted, most of those same studio vets will insist that equalisation should only be used as a last resort, but rest assured it will be used, and when you reach for it, you often want it to add something special to the sound, even when it's taking something away.

An equaliser is used to boost or attenuate selected frequencies and frequency ranges. You will, if you have your wits about you, be attenuating more often than pumping up the levels (we'll get into that a little more in a minute).

Ideally, then, you'd think that you'd not want your EQ to add anything at all, but just to do the job transparently and precisely. You can certainly pursue that course, and no one would ever question your approach. Nevertheless, there has been much waxing poetic as to the properties of particular EQs, whether they be classic (and expensive) standalone vintage units or equaliser sections salvaged from famous mixers.

A quick perusal through the pages of any music equipment website or catalogue will make it abundantly clear that the market for good equalisers is nearly as competitive as the market for high-end mic pres and compressors.

There are a vast number of designs, both hardware and software, on the market, ranging from the familiar hi-fi graphic EQ to fully parametric, automatable 'smart equalisers'.

Some EQs are simple tone control devices, while others have all the bells, whistles and flashing LEDs you could possibly want. Each of them provides a different approach to the seemingly simple task of boosting or cutting frequencies.

You might be asking yourself, why on earth would someone bother to dig up and dust off an old EQ, and why would software developers want to reproduce them? Well, there are a couple of reasons.

First of all, like vintage guitars, amps or synthesisers, a great vintage EQ has its own sound. There is a specific character that comes from those old circuits - they are pleasingly imperfect, coaxing a hint of oh-so-delectable distortion from their aging circuitry.

Also, there is the design to consider. These days equalisers are wildly flexible, providing user control over just about every aspect of the job, but in the past, console manufacturers had practical limitations. That meant providing a finite number of fixed frequencies with maybe an adjustable mid-range frequency.

A lot of thought went into providing the most musically useful frequencies in an EQ - for instance, the EQ on Malcolm Toft's Trident consoles helped to define what is now called the 'British sound'.

Needless to say, production is all about character, so an EQ with a bit of personality can be quite useful for certain types of music. Even if you're not after a specific character of sound, however, you will likely find yourself in need of a quality EQ or two for everyday recording and mixing needs, and it helps to know about the various types of equalisers and what functions you can expect to see on them.

As we mentioned earlier, some EQs look (and act) like the graphic EQ section on a boombox or hi-fi. These EQs offer multiple vertical sliders arranged across the panel, with the lowest frequencies on the left and the highest to the right.

Each slider can boost or cut its associated frequency. These frequencies are fixed, meaning you can't adjust any specific ones that the manufacturer didn't include in the design.

Most of the EQs you see on mixers (and many standalone equalisers) provide one or more 'parametric' frequencies, meaning that you decide which frequency should be affected. There may only be a single parametric control, assigned to the midrange, while the bass and upper frequencies are fixed.

Often the upper and lower frequencies will be subject to 'shelving' equalisation, which means that a specific frequency might be adjustable but all of the signal below (low-shelf) or above (high-shelf) that selected frequency will be equally affected. This can be useful for, say, rolling off all the low end in a track with too much bass rumble.

In an ideal world, you'd never have any need to use EQ. It's always best to balance your frequencies with skilful sound design, microphone position and superior arrangement skills. The less you need to do at mix time, the better!

Still, it's a given that you will find yourself with tracks that crowd or conflict with one another, and attenuating one track to let another shine through is a reasonable compromise.

We intimated earlier that you may be better off attenuating a signal with EQ rather than boosting it - this is because a boost may result in added noise and will certainly make it more difficult to keep your levels in check.

However, this practice is very much a leftover from the hardware era, when signal noise coming from the EQ itself could be problematic, so don't lose any sleep if you feel you have to give the bass slider a bit of a nudge.

You can, of course, also use your equaliser for dramatic effect. Take, for example, the famous 'telephone' effect, wherein all but a narrow range of frequencies is scooped out of a track.

Pink Floyd's venerable Wish You Were Here (ubiquitous with buskers the world over) begins with a drastically equalised signal and then shifts to the full spectrum after the intro.

It's very effective, and a technique still used in dance music to thin out a breakdown before a track's beat and bass drop.

Using EQ for effect is an art and as such, it's up to you to put your own personal stamp on this under-appreciated yet critical studio tool.

This Windows-only plug-in looks very much like the Pultec EQP-1S, an extended version of Pultec's legendary EQP-1A3, possibly two of the most sought-after (and costly) EQs on the vintage market.

The Pushtec provides five bands, all of them adjustable. It may not make your track sound like it was mixed at the Power Station, but it will do a fine job and look darn good doing it!

Find out more about the Leftover Lasagne Pushtec 5+1A

Another EQ that looks for all the world like an old Pultec - this one, however, is strictly for the Linux crowd.

In any event, this little fella sounds every bit as good as it looks. You get low, high and a pair of mid-frequency knobs (one for gain, the other for frequency selection), and you can adjust the bandwidth of the mids.

Very nice, and the price is certainly right.

Find out more about the Linux DSP CH-EQ

This gem from BIAS is a 'smart' equaliser, meaning it can analyse the spectral character of one recording and apply it to another.

This allows you to match your overall sound to that of your favourite recordings, but more importantly, it allows you to learn how they differ and to adjust your recordings accordingly. You can save your spectrums for later use, as well.

Find out more about BIAS Repli-Q

IIEQ looks like a graphic EQ with knobs, but it's actually a parametric affair with a full ten bands, the first and tenth of which are shelving.

The shelves have gain and cutoff frequency knobs, while the remaining eight are peaking filters with gain, centre frequency and Q controls. There are VU meters to keep you out of trouble, and with +/-20dB of gain on offer, you might need 'em!