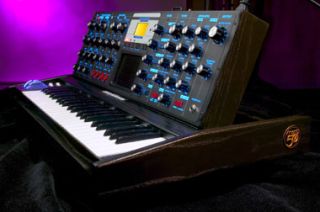 1. Lo-fi space cadets Harmonic 33 use GMedia's excellent M-Tron to help create their retro soundscapes. It's an emulation of that tape-based proto-ROMpler, the Mellotron, as used by The Beatles, Radiohead et al. If you'd like to get the same kind of feel without spending, a free Mellotron emulation is available: MelloSound. Set its attack and release times to long values, and then douse with a little reverb for instant organic vibes.

3. You can get classic C64-style chords out of any synthesizer with a built-in arpeggiator. Simply create a patch based around a pulse wave, play a three or four note chord and turn up the arpeggiator speed until the sequence begins to sound like a chord rather than a series of individual notes. Adjust the arpeggiator's length or gate to get the sound you want, and add a slow pulse width modulation sweep to get that crunchy SID-chip vibe.

4. When creating synth leads, it's possible to get a lot of movement simply by detuning oscillators against each other. Set up two saw waves and detune one by 40-60 cents. When you play the patch back, note how each key modulates at a different speed. Extra voices using the same oscillator wave shape and detuned between the two can be added for an even phatter sound. This effect works well with saturation, chorus and unison, so if your synth has these, give them a whirl.

5. Remember, you can automate most controllers these days, not just filter cutoff. For instance, try varying the filter envelope amount instead for a similar effect.

6. Many synths feature noise oscillators, which can be used to create swooshy filter sweeps. They can also be employed to add a percussive element to your patches that works particularly well with darker, more filtered sounds. If you feel your synth patch needs more definition, try gradually adding to the amount of noise in the mix until the desired effect is achieved. This kind of sound works particularly well with a quick low-pass filter envelope.

7. The Minimoog is one of the most sought after synths of all time. Some owners got even more filtered goodness out of it by feeding its outputs into its inputs, resulting in the signal being filtered again. You can achieve a similar effect on a synth with two filters by setting them up in serial mode, and switching them to the same filter cutoff frequency. If your synth has a saturation stage that can be applied between the filters, try using it to add a little warmth to the tone. A different effect can be created by separating the filters ie, having them at different cutoff levels. The second filter should be more severe than the first for this effect to be noticeable.

8. Band-pass filters might sound weedy when fixed to a particular cutoff level, but if you give them a bit of movement they can be used to create some dynamic noises, so use an envelope or LFO to control the filter's cutoff level. Using a band-pass filter will result in only a small frequency band output, so you may want to try layering another more full-bodied patch underneath to fill out the sound.

9. If all this synthesis is getting too much and you feel you need to add a natural element to your sound, try layering it with a more organic patch from a ROMpler. For example, doubling a bass part with a double-bass patch can add definition and vibe to a relatively uninspiring sound.

10. If you feel you can't get the right sound using just one synth, try layering up a couple of synth parts to create a single sound, or bouncing your work down to an audio channel for further processing. Bouncing a part down as audio allows for a level of editing accuracy that can be hard to achieve using the synth's controls.

11. Some synths are capable of infinite release times, or at least very, very long release times - handy when you're programming sounds and need to tweak a lot of knobs.

12. Get an old-school synth effect with your audio and samples using mda Tracker from mda-vst.com. This clever plug-in detects the pitch of a signal and replaces it with a simple oscillator tone. To create random-sounding computerised noises, turn the Dynamics, Glide and Maximum settings up to full, and set the Transpose value to 24 semitones. Set the Mode to Square, then adjust the Trigger amount to taste.

13. A big part of a synthesizer's sound comes from the processing and effects applied to it. If you have a synth part that sounds cheap because the synth's built-in reverb is of low quality, use a better quality one as a send effect. This way you can use it on all your synths without maxing out your CPU. If you want a different effect on each synth, try using two reverb sends - one short, one long - in varying amounts for each instrument.

14. Many synths feature a 'unison' mode, which thickens up the sound by layering detuned oscillators. If your synth doesn't feature a unison mode, but does offer multiple oscillators, you can achieve this effect yourself manually by simply turning on a few voices and detuning them until your sound has a sufficient amount of body.

15. Before the advent of hi-tech computer music technology, producers often had to improvise in order to get the right sound for a track. For instance, the rapid bass part on Donna Summer's electro-disco classic I Feel Love was created using a delay rather than high-resolution sequencing. If you feel you're in a creative rut, try using effects in unusual ways to help you come up with something new.

16. When using a delay plug-in that introduces distortion into the feedback loop (like the excellent ET-200, available from device.arcanedevice.com), automate the feedback amount (here labelled Intensity) to increase quickly just before the sound you're passing through it has disappeared. This will turn it into a scream reminiscent of old-school analogue sci-fi effects.

17. To get an old-fashioned spring reverb effect, ideal for retro space effects, turn your reverb plug-in's room size down low, crank the reverb time up until the tail of the sound is suitably long, and turn up any damping controls to make the effect sound more lo-fi. Adding a delay effect afterwards can create a bigger sound, but don't overdo the feedback level or you may lose the reverb's characteristic sound.

18. Some synths, such as LinPlug's Albino 3, have a chord mode. With this, you play a chord, and then all subsequent key presses trigger that chord, transposed to whichever note you hit. This effect can be replicated in most sequencers using MIDI effects, such as Chorder in Cubase and Chord in Live. Try arranging it to trigger multiple octaves of the same note to get an instant big sound.

19. If your sequencer doesn't offer a chord mode, you can at least create intervals by detuning your synth's second oscillator by the desired number of semitones. Detuning seven semitones creates classic fifths, but try fourths, sevenths and other intervals to get different feels.

20. Programming sounds with your mouse is all well and good, but a MIDI controller with a few knobs can make the process more pleasurable. Plug-ins like Reaktor and Z3TA+ enable you to set the upper and lower limits of a knob's range, which can be helpful when trying to fine-tune a sound. If your synth has a MIDI learn function, assign the same knob to a couple of values to make dynamic changes to a sound.

21. When programming shorter or more percussive patches such as leads and bass, the attack part of the sound is what gives it most of its character. A fast pitch or frequency modulation amount envelope can be used to add dynamism and punch - if your synth enables you to adjust the envelope's contour, experiment with its shape to get the right feel.

22. If you have a synth with a filter capable of self-oscillation, ie, one that starts producing its own pitched signal when the resonance is turned up above a certain level, this can be used to easily create your own FX. Tie the filter's cutoff frequency to an LFO, and automate the cutoff level and LFO speed to create abstract other-world FX.

23. A classic effect that uses self-oscillation involves turning up the filter's resonance so that it self oscillates, then modulating it with an envelope with the sustain level set to zero and a short decay time. This creates a disco-tastic synthetic plop that can be further tweaked by changing the envelope's attributes, or through the addition of chorus of saturation FX.