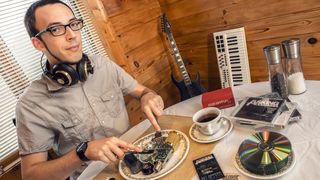 "There's a big business relying on you, including the band, all their families and even their managers. Definitely don't let that stress you out, but let that light a fire under your ass to do things in a responsible way."

American record producer Joey Sturgis only started recording in 2004, yet already has a vast array of production credits. Operating within the metalcore and rock domains, his experience in mixing, mastering and audio engineering has made him one of the go-to producers in his field.

Not only is Sturgis a producer, but he also owns his own plugin company, Joey Sturgis Tones. The latest product, Finality, can be found on the JST website.

We sat down with Joey to find out his top 10 tips for producers...

1. Listen to a lot of different styles of music and let that be influential

"I've found this to be important over the years. I've worked with a lot of interns and a lot of them think they need to know everything about metal in order to produce metal, but what I've found is you can listen to hip hop, for example, and take clues and hints about rhythm, counter-melodies and beats and apply that to metal.

"I feel that's not intuitive to most people. So listen to a lot of different music, let it influence you and don't be discriminative about genres or unpopular styles of music when it comes to what you're working on.

"Remember, rock music was an evolution of blues combined with some other things, so everything is an extension of something that came before it - and if it wasn't for that we wouldn't have the diversity we have now."

2. Don't be afraid to speak your mind - gut instinct is powerful

"When working with an artist, there's a lot of emotions involved. Sometimes it can be stressful because you're not sure if they'll think your ideas are stupid or if they're even open to ideas. It's important to know that the artist is walking into the room to try and sell you the song, and they might not even be 100% sure about it or think it's the best song they've ever written, but you've got to be able to see through that and not be afraid to speak up about it as well.

"What I say is, put it all out there and don't have any fear, because a lot of limitations in music come from fear. What if this song isn't going to make their fans happy? What if it doesn't sell? What if it's too heavy or too fast? But all these peer-driven things are going to put you in a box. I've found that gut instinct is always right.

"The first time I listen to a demo I'll take notes, because as a producer that's where the inception begins. Sometimes I won't even read them until after hearing it many times, but my instinct always tends to make sense."

3. Always have a reason for your ideas

"Let's say you're working on a song and the intro is too long. You want to shorten it, and in your mind that's exactly what you should do, but what if the artist asks 'why'? If you don't have a good reason, you're going to be hard to deal with, and that can happen on multiple levels.

"Part of speaking your mind is making sure you know why and what it is that you're trying to accomplish through those reasons. You've got to think of it as not going to war with an artist, but showing them how your idea is going to make the song better and prove to them why.

"This may be a moot point, but even if you're feeling something should happen in a song and you're not sure why, I still think you should speak up and try to feel out the reasons behind it."

4. Listen to the artist and try to put yourself in their shoes

"This is so important because I heavily disagree with producers who say, 'no, no, no, you're doing it all wrong, the chorus has to hit at x point'. Any type of rule set you come up with is completely wrong.

"If I can't come up with a really good argument for why one of my ideas is good, and I'm putting myself in the artist's shoes, then I know it's not the right thing to be doing. I also find it's very important to listen to an artist. They might tell you, 'this doesn't have enough bass', but maybe that's not what they mean - maybe the guitars are too loud so the bass isn't getting the opportunity to alter the song, or if the vocals aren't loud enough maybe it's because all the music's too loud.

"Try to understand to the artist, even when the words aren't coming out of their mouth."

"Be confident, but make sure your confidence comes from a place of humbleness and sincerity, and that you only care about the quality of the product and the art.

"You don't want to be saying how you've achieved this and that or sold this many records and produced this many No.1 songs and therefore what you're saying is right. If that's your attitude, your ideas are probably wrong because you're essentially basing your decisions on what's happened in the past.

"Now, of course we need to be drawing inspiration from our experiences and all of the music that we have consumed, which has happened in the past, however, the decision-making process should be forward-thinking. Let's not forget that it's just art; it's not a right or wrong contest.

"This is a growing problem because the more readily available we are to home recording, the more this will become a factor. If you really want to excel as a producer, it's competitive. There's a lot of other people out there willing to wake up at 5am, go to the studio and work a 16-hour day.

"If you're not being responsible, somebody else is, and they'll take your work from you. So remember, there's a big business relying on you, including the band, all their families and even their managers. Definitely don't let that stress you out, but let that light a fire under your ass to do things in a responsible way."

7. Stay current, but know when to go off the beaten path

"It's important that you stay current and know what's going on, but you also want to contribute to that right? If you're just trying to follow everyone then you're not contributing, being a leader or paving your own path.

"It's important to have some sort of unique approach. For example, I started incorporating cinematic sound effects into the metal genre, adding explosions and car crashes into songs, and even went as far as doing movie trailer string compositions over the top of breakdowns, and that's what made me popular as a producer.

"What I learned from that is, once you find a new or unique approach to a certain style of music, it's something you should run with as long as you know that it's working."

"The worst thing is when you get an artist that comes in fired up, super-inspired and motivated and you've got a six-hour drum setup process. By the end of those six hours, the artist is no longer stoked and you've killed the entire vibe [laughs].

"The way I have everything set up, it's always ready to go. I can record vocals, drums or guitars right away, and I also set up my production process so that I have sessions created if the artist wants to record a guitar riff on a song then immediately jump to vocals on a completely different song.

"That's super-important in today's environment, as the demand for instant recalls or delivering songs in ten different formats has gone insane. I'm always prepared for whatever the artist wants to throw at me, and that's what makes me a good producer."

9. Look at the bigger picture before the artist even walks through the door

"Ask yourself, how am I going to approach the record? Am I going vibey or more old-school? I want to know this before the band has even come through the door, because that's going to trickle all the way down to every movement I make in the studio.

"If you're thinking about the big picture with every move, it's going to create a more cohesive product in the end. I've always tried to get on the same page as the artist from the start, asking what they're trying to do with the record.

"I like to talk to them on the phone or hang out with them at a show if possible and almost become one of the band members. I find that to be very eye-opening and it's better than trying to do that during the creative process."

10. Have fun. The joy of the art creates wonderful art.

"All things considered, people can hear when you're having fun and when you love what you're doing, and the biggest translatable thing a producer can do is to funnel that into the music.

"Of course, you may have your sad and depressing songs, but I guess the motto here is, if you take it too seriously it will come to a point where you become unhappy, your work will suffer and the art will suffer.

"So put the art first, and if you're having a bad day try to put that aside because music is forever. You're literally creating history, and once that song's recorded it's out there forever."