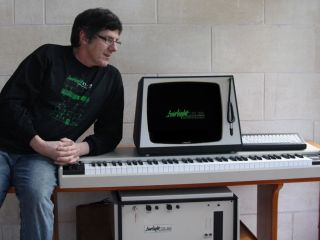 Peter Vogel with his new Fairlight CMI-30A: is it analogue or digital though?

For as long as there have been software instruments and effects, many developers - and indeed, many musicians - have been fixated upon the idea of creating utterly authentic software emulations of classic analogue hardware.

However, this has proven to be no easy task; it's easy enough to code a Minimoog-like interface, for example, but debate still rages over whether software can match up to the genuine article in terms of sound. Make no mistake: doing analogue modelling properly in a plug-in is no easy task.

But of course, analogue classics are not all that the software industry has sought to bring back to life. Digital legends have also been brought to the virtual marketplace, but while the high quality of many of these emulations has been recognised, those with a fundamental grasp of all things digital might assume that creating them wasn't quite as tricky.

It's not unreasonable to infer that translating the 'noughts and ones' aspects of the hardware into a software plug-in should be straightforward compared to analogue modelling. But is this strictly true?

Back to the start

The place to start when it comes to answering this question is the development process itself: how do you go about emulating a piece of digital music making gear? Waldorf's Wolfram Franke is part of the team that recreated the famous PPG Wave 2.2/2.3 synths, and he decided to begin by asking the experts.

"The first step was to collect as much technical information about the PPG Wave 2.2/2.3 as possible and work through it and understand it," says Franke. "We were assisted by the two PPG geeks with the deepest understanding of its architecture: Hermann Seib, who has himself developed a PPG Wave simulation; and Wolfgang Palm, the inventor of wavetable synthesis and original creator of the PPG Waves.

"The second step was to develop algorithms copying the behaviour of the original PPG Waves. Third was to compare the stuff against real PPG Waves and modify it so that it matched the original as closely as possible. Meanwhile, the other stuff had to be implemented, like file handling, user interface, communication, etc."

Universal Audio is famous for its analogue-emulating UAD plug-ins, but it also took on the job of emulating the EMT 250, the first ever digital reverb, for the platform. Like Waldorf, its first port of call was the original developer, as UA's plug-in product manager Will Shanks explains.

"The most important step was to track down the original EMT 250 algorithm designer, who of course was digital audio pioneer and MIT professor Dr Barry Blesser. We found out that he still had the original EMT 250 design documentation," reveals Shanks. "So the next step was to sign him up as a developer for the project in repurposing his original work for plug-in use. This allowed us to get an exact copy - not just an approximation - of the multiple algorithms found in the EMT 250.

"The next step was to procure a 100% original and operational 'golden unit', which we found with Allen Sides' collection at Ocean Way Studios. This allowed us the best measurement data for the analogue and digital system models. The next steps were for our engineers to do the design and incorporate Barry's work, and for me to conduct the sonic evaluations directly against the hardware, fixing bugs along the way."

Neither of these emulation projects sounds like a walk in the park, and what's more, you'll note that Will Shanks points out that the EMT 250 wasn't a purely digital device. This is actually true of many pieces of music-making equipment that are commonly characterised with the D word, and is a further complication in accurately recreating their sound.

Fairlight's CMI is a prime example. This has been revived in a 30th anniversary edition (and, remarkably, an iOS app), by original developer Peter Vogel, so he was in the enviable position of being able to consult himself when working on the emulation. He has some interesting points to make about the ways in which the CMI's 'hybrid' design influenced this.

"To work out what the CMI was doing algorithmically in the digital domain was very easy; it actually did very little. Just clocked out the samples at variable rates depending on pitch.

"The analogue sections were more complex. It would have been possible to measure the characteristics of a real CMI, but we could cut that corner because the effects we needed to emulate were etched indelibly on my brain from years of trying to minimise the effects of what has now become our Holy Grail: the colouration that caused 'that' sound."

What was it that caused 'that' sound, then? The AD/DA conversion process, perhaps? Not according to Vogel: "The AD/DA converters are relatively minor contributors to the colouration compared to the analogue trickery. In particular, the CMI used envelope generators to expand the dynamic range and tracking filters to remove aliasing. These imposed their own strong footprint on anything going through the system."

While discussing specific challenges posed during the development of Waldorf's PPG emulations, Wolfram Franke touches on the subject of envelopes too, also revealing that - yup, you guessed it - the original synth isn't quite the purely digital instrument that one might assume.

"The filter and amp envelopes work with a combination of digital calculation and analogue processing," he confirms. "Very short rates are handled by analogue parts while longer rates are calculated digitally and are smoothed by analogue parts. Furthermore, the shape of these envelopes changes from rate to rate since Wolfgang Palm had to use a lot of tricks to fool the CPU, which was very limited both in speed and in bit resolution."

Taking all of this into account, it would certainly be hard to argue that emulating a digital product is easier than recreating an analogue one. In fact, given that many of these digital devices are actually hybrid designs that also feature analogue elements, you might even make a case for saying that there could be more work involved.

Ultimately, though, the consensus seems to be that it's just a case of dealing with a different set of challenges. "With analogue or hybrid gear, you have schematics to look at and you can guess or measure the effect of the circuitry," says Peter Vogel. "With digital, you have some functional specs or hopefully software source code from which to work."

"It's just a different discipline," reckons Will Shanks. "Like with anything, it's always about good design and paying attention to the minute details in the analysis and evaluation. All things being equal, it takes just as much time to capture the details that are important to the sound and behaviour of a digital system as a purely analogue system."

Liked this? Now read: The 17 best VST plug-in synths in the world today